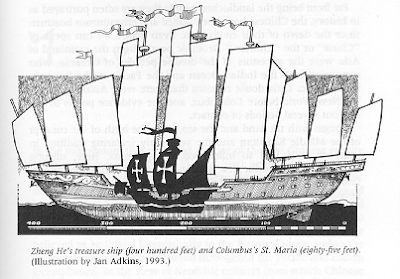 So why did we leave the Moon, never to return? Why is NASA wandering in the wilderness? Let's update Landes, shall we? In America, the opportunity of private initiative that characterized even such Government projects as the search for a low-cost way to orbit was a source of participatory funding and an assurance of rationality. OK, then.

But hey, this is all crazy talk, right? I mean, NASA would never skew things because of politics, right? Right?
Posted by Borepatch

Interesting anecdote: I live in South Denver where the major employer is Lockheed Martin, previously Martin Marietta. Their facility in Louviers Colorado was the birthplace of the Titan Missile (it's located on Titan Road), and much of the work for the Apollo program was done there. I have a friend that works there today and he told me that all the old records from the Moon program are stored in cardboard file boxes in old concrete tunnels that were originally constructed to carry away rocket exhaust, back when they did stationary testing of rocket motors. These boxes, some of which had the longhand trigonometry calculations for the lunar approach, have been ruined by the damp conditions and attacked by rodents, who have eaten all the labels off the boxes since they like the flavor of the glue. So any attempt at returning to the moon would have to be done from a standing start, so much of the knowledge has been lost to history.

I heard it said that planting the flag on the moon was the high-water mark of human civilization, much like the Pyramids were for the Egyptians. It's looking more and more like this may be true.