Why I'm a Global Warming Skeptic

My education background is kind of strange. Most people who get more than one degree follow the Bachelor's - Master's - PhD route. This makes sense if you're going to spend your life as a Academic - specialization is the name of the game. The narrowing of your focus isn't a bug, it's a feature.

I don't naturally gravitate to narrower focus, and spent college studying Electrical Engineering, Economics, and History (2 degrees, three majors). As to the topic at hand, it gives me some advantages when looking at the problem. Perspective, really.

So let's talk about Global Warming. There's an awful lot of huffing and puffing in the press about how our Carbon Dioxide is contributing to a runaway greenhouse effect that's melting the North Pole and we have to STOP.RIGHT.NOW. And the science is all decided, so let's get cracking. You remember the Hockey Stick graph in Al Gore's movie, right?

Well, we'll come back to the science, but can we first start with the history? The first clearly usable scientific Thermometer dates from the 1630s, and we have good temperature records from the late 1600s. What do they tell us? Do we see a runaway temperature change? A Hockey Stick? 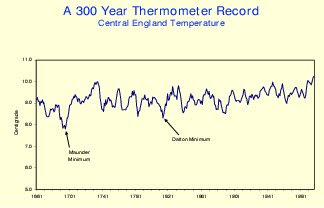 In a word, no. We see (maybe) a very slight uptick in temperature over the course of 300 years.

Well, say the Global Warmers, you're arbitrarily choosing the time scales. A longer time period would show the warming trend. Well fortunately, we have quite good historical records on the length of the growing season, harvest size, and other data that we can use as a proxy for temperature, even though we didn't have thermometers. There are also measurements that we can do, like counting how much pollen is in different slices of cores that we drill, or tree ring analysis, or ice core analysis. So let's roll the time scale back. Remember, we're looking for a hockey stick. Do we see one? 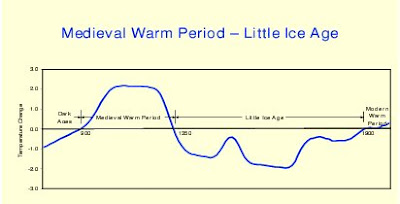 Once again, no. What we see is that things were much warmer in the late middle ages (ca. 1000 - 1300 AD), and much colder since then (ca 1400 - 1700 AD). Historians call the first the "Medieval Warm Period", and the second the "Little Ice Age". We have lots of historical records from these periods, and the transition between the two was traumatic in the extreme. The four horsemen worked overtime then, and in the Norse settlement in Greenland, were able to entirely wipe the community out. Europe got so cold that the river Thames would regularly freeze over.

Once again, perhaps this is just artificially setting the time periods for the analysis. Don't we have data that goes back further than this? We do indeed. Any hockey stick? 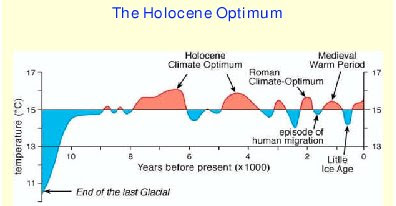 Once again, we see fluctuations between warm and cool periods, all the way back to the end of the last Ice Age. We can, if we'd like, extend this back very far indeed, by looking at data like Ice Cores. We just see more fluctuation. Nothing that looks like Al Gore's Hockey Stick (we'll come back to that in a bit). 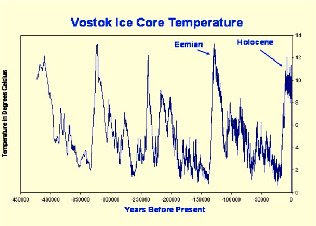 Dad was a history professor, and across from his office was the office of the Quaternary Studies group. They studied the Quaternary Period (ca. 2.5 million years ago to the present), and a wag had hung a sign on their door: Purveyors of Used Weather. They also had a graph of temperature over hundreds of thousands of years, and it looked a lot like this. So here's my first twitch of skepticism: the climate has clearly fluctuated, for a long, long time. Some periods have been measurably and significantly warmer than now; some periods have been measurably and appreciably cooler than now.

Clearly, nobody is suggesting that industrial levels of CO2 emissions triggered the Medieval Warm Period, nor that an industrial collapse caused the Little Ice Age. So how does CO2 drive all of that, when these fluctuations happened hundreds or hundreds of thousands of years ago?

And now we get into physics and chemistry. The claim is that increasing levels of CO2 will reinforce a warming trend - in scientific terms, this is called a positive feedback effect, and is actually pretty rare. Most times when something changes, other forces will tend to work against that change, ultimately slowing and stopping it. The claim here by groups like the IPCC is that increasing CO2 levels will result in a runaway greenhouse effect based on this positive feedback.

This is the second twitch of skepticism for me. We simply don't see this sort of positive reinforcement very often. Is it possible? Well, sure. Is it possible that I'll hit 100 free throws in a row? Sure. Not where the smart money is betting, though. 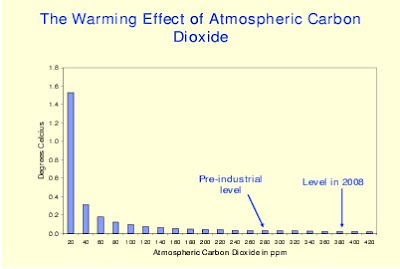 Well, we see less. In fact, we see a perfectly ordinary exponential decay curve: as you incrementally add more CO2 to the atmosphere, the increased warming is much, much less. Quite frankly, this makes sense. We have data on CO2 concentrations that go way, way back. We see that there have been times when there have been much higher levels of CO2 than today. If that was the case, why didn't the positive feedback lead to an uninhabitable planet? 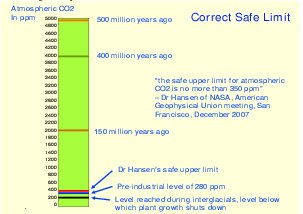 That's the third twitch of skepticism. Strike Three. It's pretty clear that the planet has been here before, and things didn't work out the way that the Global Warmers say they would. A different way to say this is that all the computer models fail to accurately predict the past, so they are presumed to be unable to predict the future.

Don't believe me, go look yourself. The charts are from the International Conference on Climate Change.

And now we come to the point where you start thinking about scientific fraud. Here are a few examples:
So yeah, I'm a skeptic. I'm not the only one. At all. Add to this the large number of climate scientists that no longer believe that we're contributing to glabal warming, and you have what looks to me like a hijacking of the scientific process by a particular political group.

Science is about transparency of data, and reproduceability. You can have a beautiful theory, but if nobody else can get the same results, then what you have isn't scientific. The scientist proposes and nature disposes. Add to this all the people in the "Shut up, he suggested" category of scientific analysis, and I start looking for political motives. Quite frankly, it's not very hard to find them.

A GISS spokesman lamely explained that the reason for the error in the Russian figures was that they were obtained from another body, and that GISS did not have resources to exercise proper quality control over the data it was supplied with. This is an astonishing admission: the figures published by Dr Hansen's institute are not only one of the four data sets that the UN's Intergovernmental Panel on Climate Change (IPCC) relies on to promote its case for global warming, but they are the most widely quoted, since they consistently show higher temperatures than the others.

"Sorry, we're too busy to check our work." My kids sometimes tell me that when their math homework is wrong. But they're not grown up, they're not climate scientists employed by NASA or NOAA, and their homework isn't one of the most widely followed data sets in the field.

Yeah, "lame" about gets it right.

A NASA spokesman said, well, what do you want from us? It’s not as if we are rocket scientists… well, we are, but the sky really is falling.

UPDATE 19 November 2008 19:28: Follow-up post here about how NASA screwed up the recent global temperature data. It wasn't the hottest year ever in Siberia; NASA's data was lousy, in an interesting way.
Posted by Borepatch

I have long thought that the whole anthropogenic global warming "science" was a sophisticated ruse to extract more money from any given population, in taxes and other fees associated with "saving" the environment.
As an increasing number of parasitic bureaucrats offset the dwindling productive class in an economy, they must devise further ways to increase their take from the producers and give to the non-producers.

So you post some graphs from the Heartland Institute, a conservative think tank. Real scientific stuff there buddy.

Tyler, why the focus on the source, rather than the content? While that is sadly frequent in these sorts of debates, it's an appeal to (or a rejection of) authority.

Not very scientific there, buddy.

- Are you saying that the Medieval Warm Period wasn't warm, or that the Little Ice Age wasn't cold?

- Do you think that the transition between them was driven by CO2?

There are all sorts of specifics that can be debated here, without appeals to authority. I find logic is interesting to try.

Assume a warming in medieval times.

So what? Unless you could establish that such a warming was driven by CO2, it has little to no bearing on our current situation.

Ed, the justification for Anthropogenic cause of today's worming is because scientists have "eliminated all other plausible causes". Pretty weak tea, that.

It becomes much weaker if we see a similar warming trend when these Anthropogenic causes were not around. The period ~ 800-950 AD looks a lot like 1800-1950, only without all the factories belching CO2.

So what caused the 800 warming? And why couldn't the same thing be causing today's? You simply don't get good answers - or even any answers at all - to these questions.

Those last questions are the scary ones. That's why most people cannot get behind this. This implies that we can not reverse this trend, since we don't know what causes ìt. We can however do as our ancestors did and adapt to the changes. Those that do this quickly wiĺl thrive.