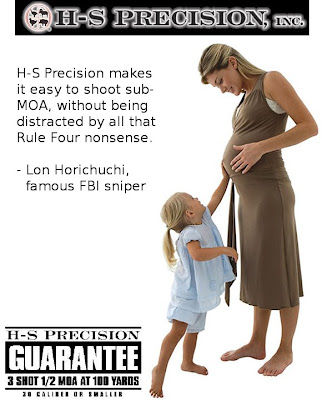 H-S Precision, Inc has the Worst. Marketing. Ever.

Sebastian is running a Photoshop contest, so here's mine. I'd add a reticle pattern, but (a) it seems kind of over the top, (b) I can't decide if it should be centered on mother or daughter, and (c) my Gimp skillz are weak.

If you have a suggestion, feel free to leave it in the comments.

UPDATE 27 November 2008 10:47: Looks like it's a Snowflakes-in-Hell-alanche! Take a look around, and leave a suggestion on improving the pic in the comments.

UPDATE 27 November 2008 11:57: This may only be understood by people who shoot a lot.  #1 Son helped me with his considerable Photoshop-fu, so here's a (much) improved version. 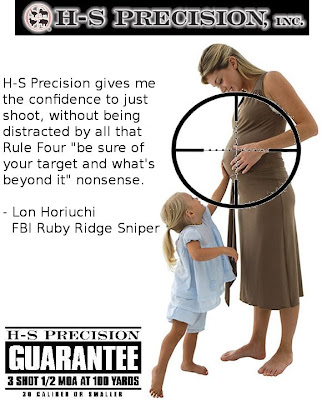 UPDATE 28 November 2008 13:46: Davidwhitewolf in the comments points out that I misspelled Horiuchi's name. Thanks. Fixed.

UPDATE 2 December 2008 20:36: Congratulations to Tim, who won the contest. My entry came in second, so thanks to everyone who voted for it!
Posted by Borepatch

Excellent! But it's Horiuchi, not Horichuchi.

Gak! David, you're right. I updated the picture.

Hey dude,
Love the artwork, is this yours?
I would like to start a Facebook group "Shun H-S Precision!". Could I have permission to use it?
Strickly non commercial.
?????

Anonymous, yes, this is mine. If you want to use it, go ahead. Please have a link back to here.