Being a bit of a history buff, I knew about the Fokker airplane manufacturer, made famous by the Red Baron and his red Fokker Dr-I triplane in World War I. While there's considerable controversy as to who it was that actually offed von Richtofen, his airplane was always a top contender to the "most likely to kill you" award. 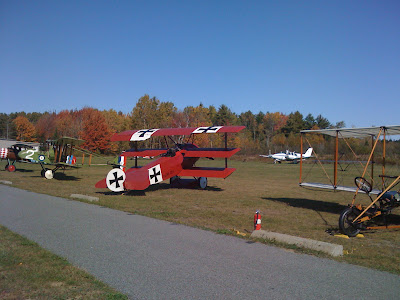 Now this is all very interesting, but not the point of the post. While I had heard that the Allies banned Germany from having airplanes as part of the treaty of Verseilles, Anthony Fokker smuggled a bunch of parts out of Germany and into the Netherlands, setting up shop as the Nederlandse Vliegtuigenfabriek (Dutch Aircraft Factory). Seems Herr Fokker was just getting started. Here's an early air mail carrier, built by Fokker USA. Ultimately, Fokker USA built a 3 engine passenger airplane that became famous as the plane that killed Knute Rockne in a 1931 crash. By then, Fokker had sold the company to General Motors.

Pictures from the Owl's Head Transport Museum in Maine, where my thought on seeing this was "Fokker USA? Who knew?" Well worth a trip to New England readers, especially on a sunny indian summer weekend. It's a long, strange journey from the Netherlands to Berlin, back to the Netherlands, then to the USA, ultimately ending up in Owl's Head, Maine.
Posted by Borepatch