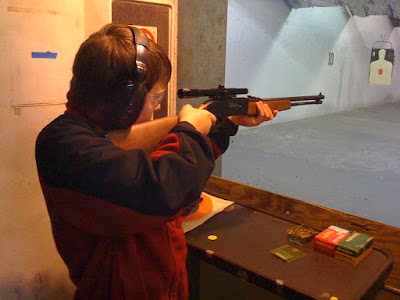 Sears sold a private-branded version of the Winchester model 190 as the "Sears T3" .22 LR semi-automatic. Burt from work let #2 son and me shoot it yesterday.

It's a blast. It's tube-fed magazine makes it easy for smaller fingers to load up (#2 son's biggest beef with semi-automatic pistols is that the springs often havc a lot of resistence, making them harder for him to 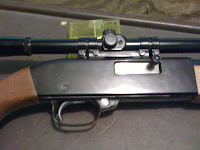 load). The magazine holds 16 rounds, so you can shoot all day (well, for a minute or two). Probably illegal in New Jersey ...

It's semi-automatic, so there's no working a bolt, just plink away. The trigger was very stiff; your finger would be sore after a hundred rounds, but it had a nice break - no creep at all. 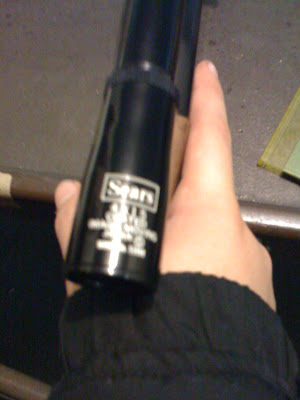 I have no idea who made the scope. Sorry for the blury picture; the iPhone does well in low-light shooting when you're taking pictures of landscapes. Not so much inside, at least for detail work.

This is a nice, accurate little rifle. The scope wasn't zeroed in (I'm not sure how long it's been since it's been shot much). We fiddled with it and got the vertical allignment down pretty well. We probably should have worked on the horizontal allignment, too, but we were busy shooting other stuff, and somehow zeroing a scope seemed, well, it seemed like work.

But the rifle shoots pretty consistently. I paused to reload while shooting these, so it's likely 32 rounds. Nice that there are less than 32 holes. 25 yards, slow fire. 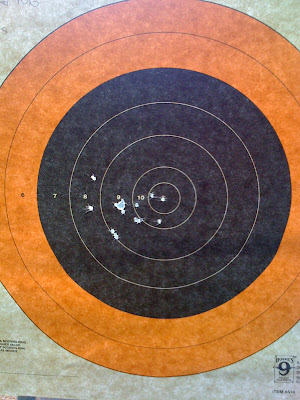 Oh, and it seems that Sears had a "Ted Williams" line of private-branded rifles, ranging from .22LR to .30-.30 (and maybe bigger).
Posted by Borepatch

Ahh, I miss the days when Sears was worth a darn. My dad still shoots a 12 gauge shotgun he bought from Sears many years ago..

I still try to shop there when I can. They look after their employees who get called back up to military service, making up the pay difference and maintaining benefits.

Jay, the number of guns that I'd just loooove is maybe higher than I can count. And I was educated as an engineer ...

Is "all of them" an integer?