While in some ways I feel like I helped in the Cold War (my days at 3 Letter Intelligency Agency), in no way did I "serve":

Bent double, like old beggars under sacks,
Knock-kneed, coughing like hags, we cursed through sludge,
Till on the haunting flares we turned our backs
And towards our distant rest began to trudge.
Men marched asleep. Many had lost their boots
But limped on, blood-shod. All went lame; all blind;
Drunk with fatigue; deaf even to the hoots
Of tired, outstripped Five-Nines that dropped behind

While this poem has become a centerpiece of the anti-war movement, the title is very, very old. Originally, it seems that it was first written by the Roman poet Horace (Odes, iii 2.13), but it's almost certain that it was a popular expression then, and always in reference to veterans. Certainly the expression was in common usage in the 19th century. 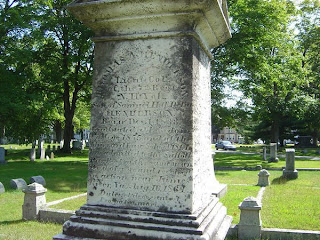 The grave of Thomas A. Henderson in Pine Hill Cemetery in Dover, NH. The inscription reads:

To serve, and possibly to die in that service is a distinction that separates men like me from veterans. Thank you all, especially Dad, Uncle Dick (Semper fi, and rest in peace), and nephew Dan (Semper fi, and we're glad that you're back).