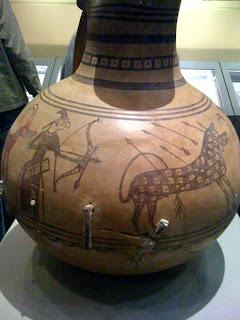 Living behind enemy lines here in the People's Republic of Massachusetts, I have to say that Boston has it going on when it comes to museums. Today we packed up the crew in the Borepatchmobile and went to Boston's Museum of Fine Arts, which is one of the world's great museums.

#2 Son is studying Egypt, so we thought we'd take him to see the Egyption collection (Dr. Who fans will recognize the question "Are you my mummy?").

However, what struck me was the Thanksgiving massacre depicted here on this ancient vase (I presume that it's Thanksgiving, as the vase is from Turkey). Actually the Phyrgian mother goddess Kubaba, shooting a leopard. And Sarah Palin simply ignored it. Ignored it, I say. Keith Olbermann wanted me to whisk the children past this to less traumatic displays (perhaps statues of naked women), but I told him that it was a harsh world, and it would be counter productive to try to shield the children. 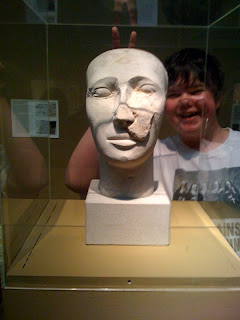 The Egyptian exhibit had some surprises. This mask is from the late Old Kingdom. It's a plaster mold of the deceased's face, and was used in the tombs. Eventually, embalming advanced to the point where the body form was maintained, and they stopped making the masks. I'd never known this, and was impressed. #1 Son was impressed in a different way.

It cost $64 for us to get in. My first reaction was Whiskey Tango Foxtrot? Then I asked how much for an annual family membership. $100, and today's $64 counted towards it. And parking was half price. They want repeat business, and will get it from us.

Those of you in New England who are ancient history buffs, there's an exhibit going on until January 4. The material is on loan from the British Museum, so you know that it's top shelf. Having an empire covering Egypt and the Fertile Crescent gave them time to stock up on priceless national patronomies on the cheap. But don't tell Keith Olbermann - I'm sure that Sarah Palin isn't paying attention to all the animal carnage depicted by the Assyrians, either. Hey, those Assyrians must have been a bunch of Red State Rednecks or something. However you describe them, "Candy Asses" doesn't fit. 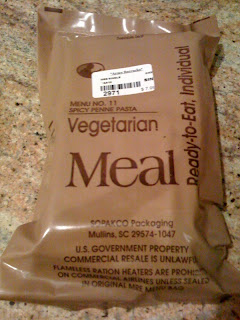 Two teenage kids burn through a lot of calories. They also are continually outgrowing their clothes. The Army Barracks surplus store on Massachusetts Avenue has an excellent stock of camo britches at decent prices. And a bunch is actual Army surplus - we got a GI issue camo winter coat for #1 Son, since he's outgrown last year's.

We also picked up more MREs. A couple readers commented the last time we got some (along the lines of why would anyone who didn't have to eat one want to eat one?). All I can say is "Teenage Boys."

It did give me one of the awesomest post titles, though.
Posted by Borepatch

Labels: art, history, me me me