Shooting with JayG and #1 Son

Yesterday, JayG invited me to the range, and we took #1 son along. 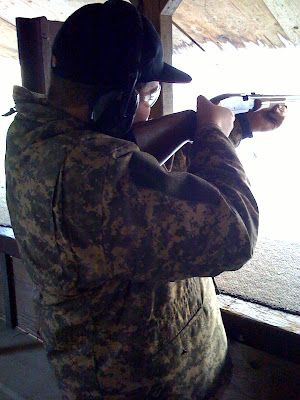 Now, my opinion is that #1 Son perhaps plays too much Zombiepocalypse games with his friends. But it's an ill wind that blows no good - in this case, he had a serious itch for pump-action shooty goodness. Jay's (I think it was a) Remington Model 12 .22 pump was just the ticket.

So much so, in fact, that I didn't get a chance to shoot it much. It's insanely accurate, and the short throw means that if you were willing to burn $25 in practice .22 ammo, you could get a pretty decent rapid fire rate.

Someday, she will be mine. Oh, yes.

There's simply nothing about this pistol that I don't like. I did catch myself flinching, but extra concentration on surprise trigger break produced acceptable results. 8 yards, 16 rounds (plus a couple of shots of .22 by #1 Son): 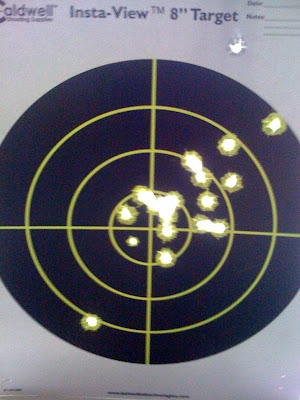 While we were there, a car pulled up right next to the range. Since the parking lot was across the street, this seemed unusual. It was a guy bringing his disabled dad to the range. Even in a wheelchair, he did quite credibly, especially with Jay's Colt .22 Police training model. We had quite a nice chat with them, which I find pretty typical of range conversation. After all, we had a lot in common:
Thanks, Jay - this was an outstanding afternoon.
Posted by Borepatch

You are more than welcome, Ted, it was my pleasure indeed.

BTW, it's a Remington 572 Fieldmaster. Just in the interest of accuracy.