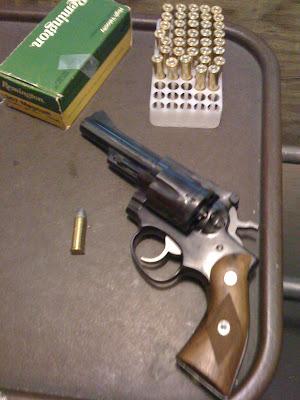 Both my regular readers know of my love affair with revolvers. There seems to be something elemental about how a revolver works. The gun moves and shifts shape as you work it; the direct linkage between the trigger and the cylinder is unlike anything in an autoloading pistol.

Handling a revolver is, to me, like holding a fine mechanical watch. It may not keep time as well as a modern electronic watch, but there is a magic to watching the movement that is lacking in newer designs.

The Ruger Security Six is a classic revolver of the old school. It is chambered in .38 Special/.357 Magnum. As the following (pretty poor) picture shows, the .357 (left-hand side) has a slightly longer case than the .38 Spec (center; .22LR included as a benchmark). I shot both, and the .357 was noticeably snappier. 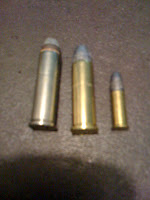 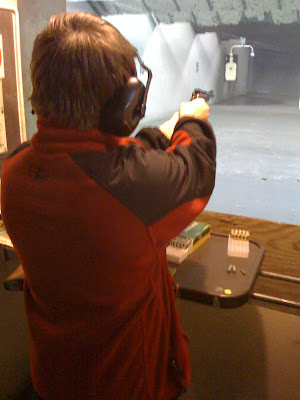 It's spendier, too. We were firing American Eagle ammo, which was surprisingly smoky. Not black powder smoky, you you could see the cloud.

#2 son likes this revolver a lot. Partly this is because a lot of magazines for semi-automatic pistols have springs that are still a little stiff, so reloading them is a chore for him. Partly it's because he can fire a decently manly cartridge, so he's entirely self-sufficient with a grownup size gun. Not that there's anything wrong with that. 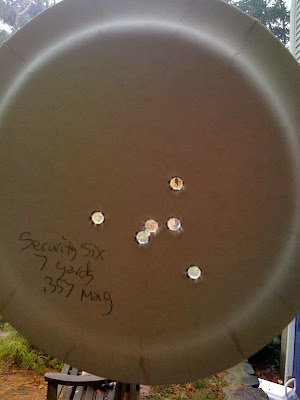 There's nothing wrong with the Security Six' accuracy, although my groupings dissapointed. Several trips to the range and a few hundred rounds of practice ammo wouldn't hurt.

Which leads me to something that I should have written about quite some time ago, and will be a regular part of future range reports. Don't take these as any sort of authoritative reviews:

I'm not any kind of gun or shooting expert. I like shooting, and shoot a fair number of different guns, but I'm really a dilettante. Your mileage may vary, void where prohibited.

I'm not a shooting teacher, although I do like to introduce people to shooting. Maybe some day I'll take the NSA teaching class, but until then, you get a dilettante's view. You'll get opinion here, but if you get serious about shooting, you'll want to get someone who knows what he's doing to give you some pointers. It can help.

And oh yeah, shooting things is fun.
Posted by Borepatch

Very nice. Revolvers are a love of mine also. I would like to find a good used model of the security six at some point. First though, I want a good single six in .22 /22 WMR, and another single six in .32 H&R Mag. There is not a more fun gun to shoot than the single six in .32.

Didja know I have a Security Six?