A while back, I shot a Beretta Cx4 Storm carbine. It was a frustrating experience - in particular, I had trouble with the iron sights and the trigger. I think that this was the only Range Report where I couldn't find much good to say about the gun. #2 Son liked it, though. So I thought that since I still get a fair number of hits (for me) from people using their Google-fu for information about it. 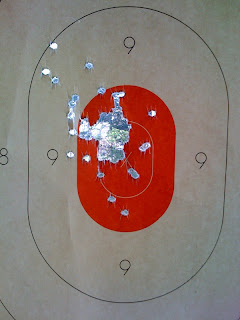 Now, the interesting thing here is not the grouping: 25 yards really isn't very far, so there's not much to brag about here (it's an indoor range). What's interesting is that my impressions from the first time were pretty far off the mark. I was quite frankly pretty flummoxed the first time around. Going back to the well - especially with modifications that addressed the biggest objections - was instructive.

So here's my thinking about the Beretta Storm:
I guess that if you shoot something that simply doesn't sit well with you, it's worth while trying it out again sometime.

I'm not any kind of gun or shooting expert. I like shooting, and shoot a fair number of different guns, but I'm really a dilettante. Your mileage may vary, void where prohibited.

If that's not a typo, you are The Man!

Fixed now. Thanks!
Posted by Borepatch

If that's not a typo, you are The Man!

People clammor far-and-wide about the 12 guage being the ultimate home defense gun...and I won't lie, #00 Buckshot is really unmached in close-quarters combat. Still I find the recoil fairly nasty on a shotgun due to the fast-burning powders and the load of ordinace it packs, so I wouldn't expect a new shooter to practice often enugh with it.

Handguns are nice too (and my personal choice, as you can tuck them away if that dorbell ring just happens to be the Avon lady, or a stranded motorist, or the police without having that aquard conversation of why you answered the door with a trench-broom) but they're also some of the most difficult guns to shoot. So if a new shooter asks me about a home-defense gun, I always recomend a pistol carbine. Long guns are easy to shoot, recoil is moderate, the carbines are most often light and handy, pistol calibers from long barrels are quite adequate in stopping power if using proper defensive loads, and they accept large amounts of ammo, and reload quick, so what's worth shooting once is worth shooting twice, and low recoil semi-auto means fast 2nd shots!

Also you get about the same building meterial penetration with a pistol carbine as a 12 guage buckshot....they'll still shoot through (multiple) walls and doors, but not to the excessive nature of things like rifle carbines, or slugs.