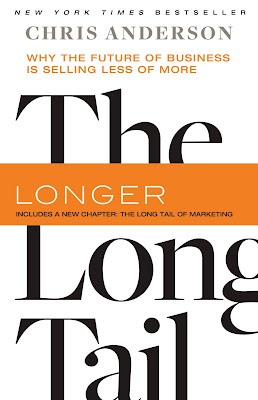 I work in tech, so I keep an ear out for interesting books that describe fundamental changes in how business is done, especially when it effects tech. Chris Anderson's book The Long Tail is probably the most significant book about the Internet economy ever.

User behavior is very different, in interesting ways, and this drives business model changes. Anderson uses Rhapsody (RealMedia's online subscription service) because they shared subscriber usage data with him. It was interesting data. In 2004, Rhapsody had a million and a half music tracks available for subscribers to listen to. And listen they did, but in a very unexpected way:

But by then I had som hard data, thanks to Rhapsody, which is one of the online music companies. They had given me a month's worth of customer usage data, and when I graphed it out, I realized that the curve was unlike anything I'd seen before.

It started like any other demand curve, ranked by popularity. A few hits were downloaded a huge number of times at the head of the curve, and then it fell off steeply with less popular tracks. But the interesting thing was that it never fell to zero. I'd go to the 100,000th track, zoom in, and the downloads per month were still in the thousands. And the curve just kept going: 200,000, 300,000, 400,000 tracks - no store could ever carry this much music. Yet as far as I looked, there was still demand. Way out at the end of the curve, tracks were being downloaded just four or five times a month, but still the curve wasn't at zero.

"The Long Tail" is a description of the exponential decay curve that this demand describes.

Music in the Head are the hits you hear on the radio, or see on the shelves at your local music store. There is a point (the line between the red and yellow parts of the curve) where it's no longer economically viable for a record label to get that CD on the shelf at Wally World. In olden days, that meant you wouldn't hear it. On-line (either on Rhapsody or iTunes), it's just another track in their database. The cost to deliver it to you is essentially zero.

So what does this mean? Well, a couple things:
This only works for product that is pure digital data - everything else has a non-zero marginal cost. But this is changing all sorts of industries. The book talks at length about Wikipedia, eBay, Amazon, and bands who choose not to sign with a record label. The Mainstream Media isn't covered, but Pajamas Media would be another example.

Business models are being created and destroyed (I am Schumpeter, destroyer of Business Models). This book is the first to describe what the actual business transition was behind the Internet Bubble. If you only read one book about how the Internet Economy works, read this one.