And back in the Real World 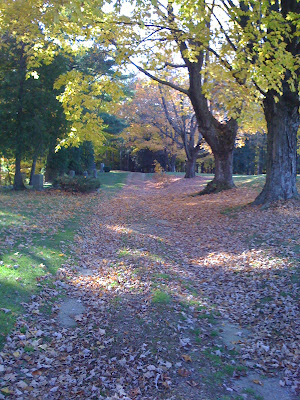 It seems that lots of folks are freaking out about who's going to win the election. I want to tell you a story that relates to this.

We live is a very pretty small town in Massachusetts. Our house is a very short walk to the town Common, and right beyond that is one of the prettiest cemeteries I've ever seen. Here's a picture I posted a while back of one of the little alleyways in the graveyard.

We take the dogs (Little One-Eyed Dog and Ivan the Terrier) there for their daily constitutional, because there's a big field just on the other side. Nobody much goes to the cemetery, so we don't bother anyone on our way through.

Nobody goes there much, but last Saturday someone did. As I walked up through the graveyard, I saw a car parked by one of the graves. A middle aged guy was sitting in a folding chair - the kind that you'd take to the Little League game. He'd decked out the grave for Halloween - pumpkins, decorations, even an oil lantern.

He was still there when we took the dogs back, so I didn't intrude. Yesterday he wasn't there, so I stopped to see whose grave it was.

The lantern was still there. Still burning. It was burning today, too.

So while I care about who wins the election tomorrow, I don't care who wins. Not care like that. Whatever happens, the Republic will continue. The flag will still wave from sea to shining sea.

And a good man will still grieve over his son's grave. Instead of worrying about the election, go hug your family.
Posted by Borepatch

Wow, that does put things in perspevtive. I pretty much came to this conclusion yesterday afternoon.

Honestly, a pretty good bout of depression came over me as I sat contemplating this election. There was a point of terror that washed over me.

I tried to blog about some topic and just could not do it. After some serious thought, I realized that my family is the most important thing to me in this world. After arriving home I hugged and kissed the wife and baby, and spent the rest of the evening cuddled up in bed with them.

What he will do to this country will drastically affect them and not in a good way.

I have not matched my Dad's standard of living, and I fear Obama will insure my son won't match mine. . . Thing's are going the wrong way and fast. . . .