One of the gentlest rants I've ever put up on this blog was from quite some time ago:


But the Revolution was indeed a revolution, and blood was spilled.  People were killed, killed dead.  The Declaration explains - offers facts to a candid world - why the founders felt obligated to spill blut onto the boden.
I've wondered what it might take to make me feel willing to do this - to declare that I and my fellows are, and of Right ought to be, free of the political bands that connected us with the old order.  It might be something very like this:


The Belgians have ramped up their organ harvesting campaign from euthanasia cases in Applied Cardiopulmonary Pathophysiology (15: 38-48, 2011) to discuss the harvesting of lungs.  I reported on this before, but there is more to add.

Note that one of the four killed and harvested had a mental illness, described in the paper as self mutilation.

When I read this, my first thought was this cannot be true.  But the magic of blogosphere linkage led me to the source, an article by Dr. D. Van Raemdonck et al. in the journal Applied Cardiopulmonary Pathophysiology: 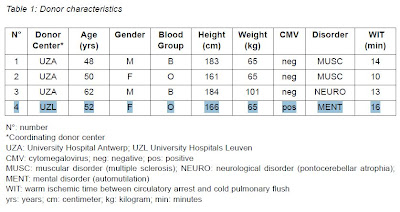 The highlighted line is the epitaph for a mentally ill woman who was killed by the Belgian Government for her organs.  Like an animal put to death so that her body parts could sustain some other creature, she was disturbed enough to hurt herself and so was condemned to death.  She was just about exactly my age.
And Belgium, that historical exemplar of humanity, sent doctors to dissect her.  All for the greater good of society, don't you know.

There's quite a lot more, so click through if you want a rant without a lot of, well, ranting.  But this story is back in the news, as a basic human decency may be stirring in Europe:


Once prohibited — indeed, unthinkable — the euthanasia of people with mental illnesses or cognitive disorders, including dementia, is now a common occurrence in Belgium and the Netherlands.

This profoundly troubling fact of modern European life is confirmed by the latest biennial report from Belgium’s Federal Commission on the Control and Evaluation of Euthanasia, presented to Parliament on Oct. 7.

Belgium legalized euthanasia in 2002 for patients suffering “unbearably” from any “untreatable” medical condition, terminal or non-terminal, including psychiatric ones.  In the 2014-2015 period, the report says, 124 of the 3,950 euthanasia cases in Belgium involved persons diagnosed with a “mental and behavioral disorder,” four more than in the previous two years. Tiny Belgium’s population is 11.4 million; 124 euthanasias over two years there is the equivalent of about 3,500 in the United States.

Recent newspaper articles and documentaries focused on cases in which psychiatrists euthanized or offered to euthanize people with mental illnesses, some still in their 20s or 30s, under dubious circumstances.

In December, 65 Belgian mental-health professionals, ethicists and physicians published a call to ban euthanasia of the mentally ill.

Sigh.  Europe may be having an outbreak of basic human decency.  Or maybe not.  Perhaps the rant is still current, although if there's only a single lesson from this recent election it is a rejection of the guiding hand by an isolated and insular intellectual ruling class.  As I wrote then:


And so maybe the people who will say that this sort of atrocity could never, never, never, ever happen here actually know what they're talking about.  Maybe they're not just a bunch of Statist Pricks drunk on their ideology of control.  Maybe they are, as they tell us, nicer than we are.
But here's the sticking point for me:


We hold these truths to be self-evident, that all men are created equal, that they are endowed by their Creator with certain unalienable Rights, that among these are Life, Liberty and the pursuit of Happiness.

Life.  My credo tells me that it's an unalienable right.  That means that any contract I might make that would terminate that is null and void, just like any contract I might make to sell myself into slavery is null and void.  Unenforceable, by the terms of our credo.
And so I watch with nauseated fascination as the Europeans once again tread on forbidden soil.  Blut-soaked boden, you might say, but that would describe the better part of that unhappy continent.  So much for Belgium, and for a Europe that would not look twice at this.

Maybe they are looking at it twice, but maybe not.  The Post article is full of quotes from the Powers That Be justifying everything.  All is for the best, in the best of all possible worlds.

And so the lesson remains that America has little of substance to learn from Europe, morally speaking.  At least for now.
Posted by Borepatch

Thank you, great-grandpa, for getting the hell out of there. I am eternally grateful. I can't imagine the kind of mental gymnastics they go through to justify such obscene behavior. And the churches stand by silently. Maybe that's another reason why the mohammedians are making such in-roads.

Rest assured, there will experts - top men - making those life or death decisions so there is nothing to worry about.

What could go wrong?

I remember reading a science fiction story, I think by Larry Niven, about a future in which organ transplants were completely routine. Of course, this created a demand for organs far exceeding the supply. Eventually, getting too many points on your driver license was grounds for the death penalty and harvesting of your organs.

This is exactly what will go wrong if concepts like what the EU is condoning continue without strong moral opposition.

When I want to go I don't want some fellow with a badge telling me I can't. When you understand your dad has told doctors he would take that option if he could you no longer have the moral outrage at the idea.
Say what you want about the Belgian actions, a person should be able to end their life when they see fit.

Chris, it was Niven, and he explored where that all ends up in a quite striking manner.

Bruce, I agree with you on that score. I reserve the right to walk that path if it should come to that. However, I very much doubt that what's going on in Europe is in the finest tradition of the ancient noble Roman stoics. To the contrary, I suspect that the State (and more than a few families) are hastening the exit of "Useless Mouths" (Google that term for the Nazi program).

Sadly, this is nothing new for Europe.

I agree wholeheartedly, but ...

Please don't sound so 'superior', after all isn't it there that it wasn't adults being euthanised for organs but newborn children? (Something that was going on for decades, and probably still is)

It's not America vs. Europe, it's left vs. normal - the common denominator in 'every' situation of inhumanity such as this was, is and will always be the dehumanising effect of leftist ideologies.

You aren't immune, look to your VA (arguably worse than even our NHS), Planned Parenthood, ObamaCare (support for euthanasia but not treatment) etc., etc., etc. (and remember Margaret Sangar was born 'there' not in Europe).

Able, there's no doubt that America is on this same road, just not so far down it. The VA should be abolished, and its former leaders prosecuted - the horror stories out of there are pretty similar to those out of the NHS.

But we have no equivalent to the Bristol Pathway (yet). And Planned Parenthood is a private corporation - it wasn't government functionaries that did the dissection of those babies. That's a big difference - after all, government is the things we choose to do together, right?

And you hit the nail on the head - it's the leftist ideology that is key here. Europe is more immersed in it than we are. At least for now.