The Morality of Gun Rights

Laws that forbid the carrying of arms... disarm only those who are neither inclined nor determined to commit crimes... Such laws make things worse for the assaulted and better for the assailants; they serve rather to encourage than to prevent homicides, for an unarmed man may be attacked with greater confidence than an armed man.


I'm out for an very early morning walk with a woman friend. She does not shoot, though she is starting to show interest. We're walking down a long trail in a small city park, a large sprawling area with miles of trails, a lot of trees and a small river. A jogger passes us every 10 minutes or so, Barkley's intent on sniffing out a cheeseburger someone just had to have left behind on the trail. She's quiet and then the question comes out.

She looked at me and said "you're carrying, aren't you?".

This is one of Brigid's best, which means that it's one of the Blogosphere's best.  Go read.

Gun rights are Gay Rights.  Gay bashing only works when the target is disarmed.

And as of today, Gun Rights are Borepatch rights.  The nice mailman brought our Georgia Weapons Carry Licenses.  I am now - in a sense that Jefferson would understand - free.

I look at things from a psychological viewpoint (as is typical).  I am convinced that the lawful carry of firearms is a moral act.  It is the act of a citizen, not a subject.  It is the act of someone unwilling to outsource the protection of himself or society to the government.

But there are a lot of things that I don't want to do, that I prepare to do anyway,  because I'm an adult.  Because I'm a citizen who cares about this Republic.  Because I strive to be moral.  Because  I believe in Civilization.


Armed people are free. No state can control those who have the machinery and the will to resist, no mob can take their liberty and property. And no 220-pound thug can threaten the well-being or dignity of a 110-pound woman who has two pounds of iron to even things out … People who object to weapons aren't abolishing violence, they're begging for rule by brute force, when the biggest, strongest animals among men were always automatically right. Guns ended that, and a social democracy is a hollow farce without an armed populace to make it work. 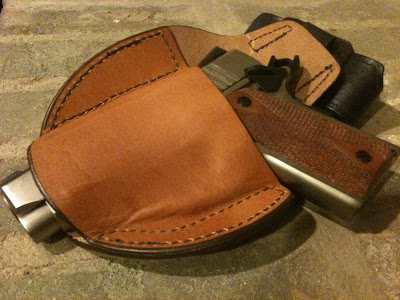 Thank you, DT. As you know, it's been a long, strange journey.

Pleased to hear that you received your permits. :)

I saw The Seagull in the tiny Bertha Martin Theater on the University of Northern Iowa campus when I was a non-trad there. I took my mother. The seating was right up against the floor level stage, inches from the actors. Very intimate. Very powerful.

I wish the missus the best in her play.

Congratulations to both of y'all!

This is the best post I've read yet..."But there are a lot of things that I don't want to do, that I prepare to do anyway, because I'm an adult. Because I'm a citizen who cares about this Republic. Because I strive to be moral. Because I believe in Civilization."

Borepatch, You cut through a lot of crap with this one--on a whole lot of what most see as "separate" or at the very least, not so connected issues. You sir gave the very best reason of all why any one with a moral compass and a drop of Patriotic blood in their veins should realize the true intent and necessity for the US Constitution and preserving, defending and protecting it are what American adults are supposed to be doing...

My best to you and Mrs. Borepatch,

These are the same reasons that I and the crowd I shoot with all carry. And the reasons my wife started shooting and now has her own permit.

Your post got them across much better than I did. It took me a couple years to articulate this well enough to bring my wife into the fold. Now I can point others on the fence here.

Thanks for being adults. And now off to read Brigid's.

what holster you got there?

Beautiful. Thanks for the L. Neil Smith quote. I need to link to this post...