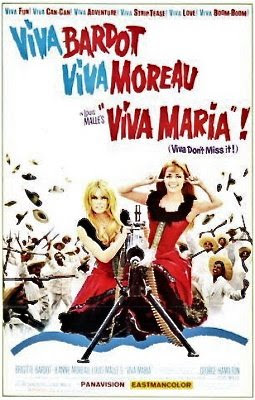 
Viva Maria! is the sort of movie that could only have been made in the 60s. Only in the 60s could someone have come up with the idea of doing an epic western combined with a sex comedy combined with slapstick combined with a Marxist political tract. And getting Jeanne Moreau and Brigitte Bardot to star in it, as two women who invent striptease and in their spare time lead a Central American revolution.

And yet it's Brigitte Bardot with a water cooled machine gun.

Maybe if you watched it with the sound turned off.  Or with the Mystery Science Theater 3000 guys doing snarky accompaniment ...
Posted by Borepatch