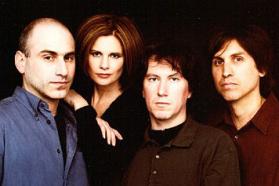 I grew up in a house where we listened to pretty much all kinds of music - Classical, Rock, Country, Folk.  When I was old enough to start thinking about such things, I realized that Country, Bluegrass, and Folk are branches very close to each other on the family tree.

In the 80s, I mostly listened to Alt-Rock like Talking Heads, and so Mom and Dad weren't usually very interested in my current musical taste.  But when the Cowboy Junkies came out with their 1988 album Trinity Sessions.  Their "Alt-" sound was "Alt-Country" (or "Alt-Folk") rather than Alt-Rock, but it soon found a home in Mom and Dad's collection.

The name comes from the recording venue, the Church of the Holy Trinity in Toronto, where the band recorded the entire album pretty much in a single day, straight from microphone to tape (!).  Because of the time constraints with the church, the band couldn't rehearse with the guest musicians - everything was spontaneous.

This should have been a disaster, but instead was sublime.  The church's acoustics, combined with lyrics not far from the Ur-Folk that I listened to growing up, resulted in an album that is nothing short of spectacular.


I only want to say
That if there is a way
I want my baby back with me
'cause he's my true love
My only one don't you see?

Blue Moon, you saw me standing alone
Without a dream in my heart
Without a love of my own
Blue Moon, you knew just what I was there for
You heard me saying a prayer for
Someone I really could care for

I only want to say
That if there is a way
I want my baby back with me
'cause he's my true love
My only one don't you see?

"A Common Disaster" is one of my favorites by the Cowboy Junkies.
It's on my Ipud playlist. I keep hunting for their cover of Ooh Las vegas on mp3 but have yet to find it.

"Trinity Sessions" is my favorite Cowboy Junkies album. It was truly lightning in a bottle - even the 20th anniversary reunion album, recorded in the exact same church, sounds different.