There's all sorts of speculation in the Lame Stream Media that Obama will "pull a Clinton", triangulating his way to a second term.  After all, Clinton lost big in the 1994 Mid-Term Elections, and he turned things around, right?  He left office more popular than when he entered it.  So why not Obama?

A picture is worth a thousand words: 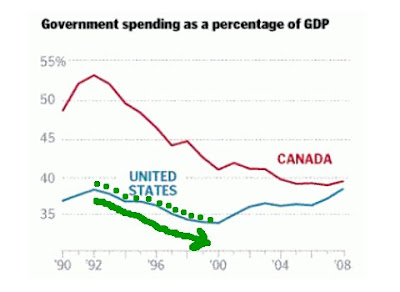 While Clinton grew the size of government, he actually shrank it as a percent of GDP.  Sure, Newt Gengrich forced this (that's why it's called "triangulation"), but there's simply no doubt that government was less financially intrusive at the end of Clinton's second term.  With a majority of the population thinking that the Fed.Gov screws up whatever it touches, people were comfortable with the trajectory of things.

Does anyone think that Obama is going to shrink the Fed.Gov's share of GDP?  Never mind that what his Agencies are doing - for example, the EPA enforcing Cap And Trade by regulation - is putting a big break on economic growth.  Does anyone seriously think that Obama and his Cabinet Secretaries accept the "grow the economy to fund new programs" view that Clinton had?

And so the line will continue to slope upwards, and the population will get increasingly uncomfortable.  Even with a modest economic recovery, and with the media desperately spinning for them, the Administration will look like they're on the wrong side of history.  These people combine arrogance and cluelessness in equal measures.  Convinced that they're the brightest people in the room, they'll think that they can tweak their way out of the mess until summer 2012.  By then, it will be clear that they've failed miserably, and they'll panic.

Really, the only question is whether the Republican Party can blow things.

Original picture from a very interesting post at Disloyal Opposition.
Posted by Borepatch

I'm not in the habit of being all Gloomy Gus, but I'm pretty sure the last line of the post should read "...only question is how badly the..."