William Herschel was a polymath in an age of polymaths.  A self-taught astronomer - who made his own telescopes, including the monster 40 foot one shown here - he is best known for his discovery of the planet Uranus in 1781.  He is (fortunately) not known for the name he gave it: Georgium Sidus (George's Star) after King George III.  We can thank the French, who would have none of that sort of shameless sucking up (to a British Sovereign), and so we're left with Uranus, the source of amusement to Middle School boys ever since.

One name of his that did stick was asteroid.

Herschel is less known as a composer, which is where in fact he got his start.  One of many German immigrants to England in the period, he is overshadowed by fellow transplant Handel.  Rather a pity.

One very curious product of this polymath mind was an observation he made in 1801.  He spent a considerable time studying the Sun, and specifically sunspots.  He found a very close correlation between the number of sunspots and the price of wheat.  He observed that Solar Cycles with low numbers of sun spots were correlated with high wheat prices, and vice versa.

And while this sounds implausible, it seems to hold up to repeated scrutiny:


Since I first looked at the matter there's been a lot of research and it appears the correlation may not be as spurious as I thought. The wheat price series is one of the longest we have, it extends back to 1250, I've got a paper chart that starts in 1300 (although some of the prices are dubious).

The CBOT has a wheat chart that starts in 1477. [Dead link updated. - Borepatch]

We have excellent records of both sunspot activity and wheat prices back to at least the middle of the eighteenth century.  We have less thorough records extending nearly 150 years beyond that:

If you look in the middle of the graph (around 1800), you'll see a 40 year period of low sunspot activity called the "Dalton Minimum".  Significant cooling occurred during this period - up to 2°C in 20 years at Oberlach, Germany - and it included 1816 (known as "the year without a summer") and 1817 when New York Harbor froze solid enough for horse traffic.  The price of food quadrupled.

It seems plausible that the Sun would effect the temperature of the Earth, but much recent research has failed to establish a link between solar luminosity and global temperature.More interesting is a proposal from Henrik Svensmark, that it's the variation in the strength of the Sun's magnetic field, not the luminosity, that counts.  A weaker magnetic field allows more Cosmic Rays to reach the Earth.  The Cosmic Rays ionize the lower atmosphere, seeding increased cloud cover.  Higher levels of low level clouds reflect more light back to space, resulting in a cooler planet.

Nigel Calder has an excellent overview of the Svensmark hypothesis, as well as the controversy surrounding it.  As you'd expect, the controversy contains much of what we've come to expect from Climate Science: Science-by-Press-Release from the warming enthusiasts, difficulty in getting responses published in peer-reviewed journals, and arguments over the proper use of statistics.

Ah, peer-review.  It's interesting if you look that up in the Climate Science dictionary.

Quite frankly, this goes beyond my depth, and beyond the depth of what I can expect to understand while doing this as a hobby.  And so I'll drop back from the science to the history:
And it's not just these records.  Just look out your window.  The Sun went spotless last week, and this has been only the latest example of reduced Solar magnetic activity that we've had for a number of years.  The last three years in particular have been very quiet, and this is the third very cold and snowy winter we've seen in a row.

Yes, I know, correlation does not imply causation.  However, this is a microcosm of all that is wrong with Climate Science today.  Strong evidence against AGW "can't be right", and weak evidence in support "must be right".

People cared about the price of food.  Money could be made or lost (not to mention millions whose lives were at stake).  The data here is very good indeed.  The data hasn't been "homogenized" and "gridded".  It's easy to count sunspots - so easy that we've been doing it for nearly 400 years.  There's even decent proxy data extending back millennia that lets us track Solar Flux.  The correlation appears to hold over very, very long periods.


Direct observations of sunspot numbers are available for the past
four centuries1,2, but longer time series are required, for example,
for the identification of a possible solar influence on climate and
for testing models of the solar dynamo. Here we report a
reconstruction of the sunspot number covering the past 11,400
years, based on dendrochronologically dated radiocarbon concentrations. 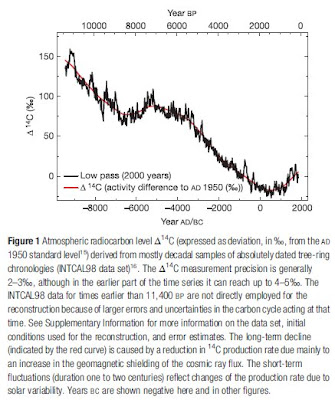 And the correlation is laying on my lawn right now, for the first time since 1882. Excuse me while I go light a fire in the fireplace.  Maybe a little CO2 will melt all this controversy away.
Posted by Borepatch

Carbon is just a proxy for Capitalism - the Left only fights proxy battles (unless it fights amongst itself eg: Stalin/Hitler and the battle field of the Spanish Civil War) because it cannot win in open discourse.

We have two frequently neglected sources for general sunspot data.

The first comes from the Chinese, who regarded sunspots as, among other things, an illness of the sun. While a count by spots taken by observing an image in a pinhole camera of sorts cannot be directly compared to the modern "sunspot numbers," there is more than enough data there to establish trends.

The second also comes from the Orient. Aurora. When the records mention aurora almost daily for centuries you can wager the sun was jumping. And when records of aurora become as rare as rain in the Atacama, you can bet on a solar minimum.

For climate - we have bog pollens, trade routes, and freezeup dates. All are greatly and periodically affected by climate - and all say it is time for another "little ice age."

You've hit on one of my favorite topics. See, I'm a radio amateur (ham) so I am vitally interested in sunspots. There are researchers who say we are entering a Dalton minimum, or worse. Livingston and Penn, from the NOAO McMath Solar Observatory, put out a paper almost 10 years ago saying that if the trend lines for sunspot darkness and magnetic field intensity kept going, there would be no sunspots by 2015.

One thing to add to your info is that we have records of sunspots that go back a long way, but modern methods are so much more sensitive that it's a fight to not count things that we are pretty sure would not have shown up over a hundred years ago. Modern sunspot numbers may trend higher than older numbers.