Film recommendation: The Other Guys

I have to say that I'm not a Will Farrell fan, at least since SNL's version of Jeopardy..  I also have to confess that when it comes to Mark Wahlberg, my tastes run to Mark L. Wahlberg and Russian Roulette. 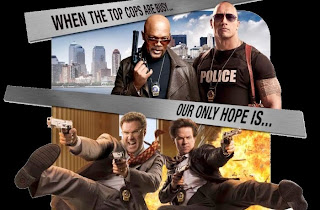 But this was the funniest Will Farrell film ever.  Predictable, sure.  But funny and well done even when I sort of saw what was coming.  That's a solid, journeymanlike return on my entertainment dollar, and that's something that catches my respect.

And it has my favorite Derek Jeter cameo, ever.  Very, very funny.  And Eva Mendes does a credible job with what must have been a difficult part to make, err, stand out.  She was really funny, too.  Very, very funny (and PG-13, too!).

It's not often that I recommend your typical Hollywood drivel, but this is quality Hollywood drivel.  Since other people do "thumbs up", I guess I need something different.  Two, err, high power cartridges, or something ...

And here's the obligatory trailer:

Sorry, but I didn't get that Will Farrell appreciation gene.