Cracks in the wall

A court has struck down ObamaCare's mandate that you have to purchase health insurance, ruling that the Commerce Clause does not give Congress power to force people to engage in commerce, whether they want to or not.  This seems destined to end up before the Supreme Court, especially since a Michigan court ruled the opposite way.  Get the popcorn.

But that's not what's interesting.  Via an email from Rick, we find the Boston Globe running a poll on whether this was ruled correctly or not. 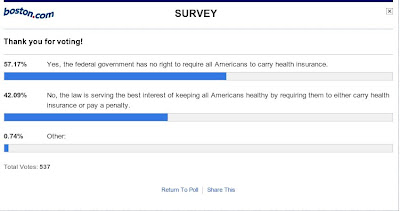 Almost 60% of Boston Globe readers (online readers, but Globe readers nonetheless) think that the Fed.Gov has no right to force people to buy what they don't want.

They seem to want it banned in Boston.
Posted by Borepatch

And that ought to tell us everything we need to know about it.