The World Meteorological Office on 2010:


The year 2010 is almost certain to rank in the top 3 warmest years since the beginning of instrumental climate records in 1850, according to data sources compiled by the World Meteorological Organization (WMO).

Oh noes!  Thermageddon!  Except not so fast: 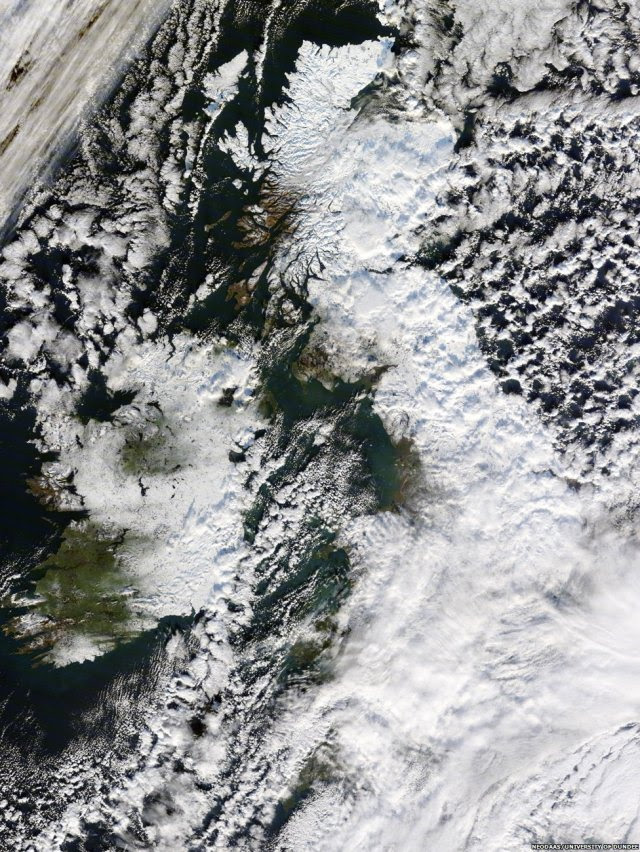 
The University of Dundee’s satellite receiving station captured this image of how the heavy snow of the past week has affected the UK.

The picture, which was received at 1145 GMT on Thursday from Nasa satellite Terra, shows almost the entire country covered by a blanket of snow.

Long term readers will recall that this isn't the first such picture we've seen this year.  The UK Met Office (the weather bureau) predicted a decade ago that warming would see the end of snow in Her Britannic Majesty's Scepter'd Isle:


Britain’s winter ends tomorrow with further indications of a striking environmental change: snow is starting to disappear from our lives. Sledges, snowmen, snowballs and the excitement of waking to find that the stuff has settled outside are all a rapidly diminishing part of Britain’s culture, as warmer winters – which scientists are attributing to global climate change – produce not only fewer white Christmases, but fewer white Januaries and Februaries.

Hey, it's the 3rd warmest year ever (!!!!), so what's with the snow?  Well, the air's gone out of the Global Warming Bubble, to the extent that the Press is starting to run stories that, well, explain things:


Actually, with the exception of 1998 - a 'blip' year when temperatures spiked because of a strong 'El Nino' effect (the cyclical warming of the southern Pacific that affects weather around the world) - the data on the Met Office's and CRU's own websites show that global temperatures have been flat, not for ten, but for the past 15 years.

They go up a bit, then down a bit, but those small rises and falls amount to less than their measuring system's acknowledged margin of error. They have no statistical significance and reveal no evidence of any trend at all.

When the Met Office issued its December 2009 preThere-diction, it was clearly expecting an even bigger El Nino spike than happened in 1998 - one so big that it would have dragged up the decade's average.

But though it was still successfully trying to influence media headlines during Cancun last week by saying that 2010 might yet end up as the warmest year, the small print reveals the Met Office climbdown.

Remember, the data's been cooked, so take the "3rd warmest year" bit with a big handful of snow-melt rock salt.

Oh, and just to deal with the typical sort of "you're cherry picking the region" argument you hear, it's not just the UK:


Norway got over a hundred new records in November.

Cold, colder, coldest. Unless you remember back to the year 1919, November 2010 is definitely the “coldest.”


The whole country is in the freezer

In the middle of November, it was extremely cold in many parts of the country, “says Hans Olav Hygen.


It is not uncommon for parts of the country to stand out when meteorologists summarize the weather of the past. This time the whole of Norway that stands out.

“It is so special that large areas are cold at once. It has simply been an unusual situation that has pumped cold air into the country, “said Hygen.

On the whole, Norway has therefore experienced the coldest month of November since 1919, with the full 3.57 degrees below the normal level.

This, kids, is why they don't call it "Global Warming" anymore.  Never mind that all that CO2 is supposed to be warming things up, it's Climate Change!  CO2 must cause record cold and snowfall.  Is there anything it can't do?
Posted by Borepatch

A friend of mine lives in Minneapolis, but was in England for the last two weeks. He says that except for their inability to cope with the snow and ice, it was hard to distinguish between the two.

If you haven't already seen this from the ironically named Sun newspaper, it's interesting.

Oh, you're missing (not really) a colder than normal first week of December up here.