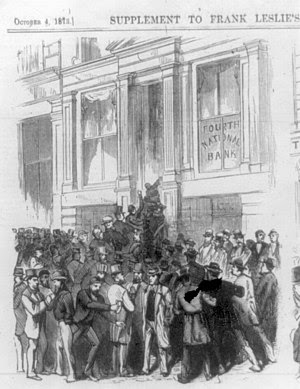 The US War Between The States had been over for seven years, during which an industrial boom of unprecedented scale had occurred.  Railroads had criss-crossed the land, finally from sea to shining sea.  A New York City to San Francisco trip that had once taken 60 days or more, via Clipper ship around Cape Horn, now took a week.  More than fifty thousand miles of railroad track had been laid, opening up huge areas of North America to the flood of immigrants arriving from Europe.

The US Government had stopped issuing silver coinage in quantity - basically going on a de facto Gold Standard.  Economists of the day said that the world should adopt a universal standard (the Gold Standard) because this would more effectively control inflation.  And so the number of silver coins fell dramatically - as did the price of silver.  William Jennings Bryan ran for President four times on a populist ticket, and his most famous speech is the "Cross Of Gold" - about how shifty Wall Street robber barons were screwing the Little Guy with monetary policy.

One of those Robber Barons was Jay Cooke, of the Northern Pacific Railway.  Railroads were the high tech of the day, unbelievably hungry for capital.  Leveraged to the hilt, the company failed to get loan guarantees for $300 Million from the US Government (worth perhaps $30 Billion today), and collapsed.  The collapse took down other Railroad companies, and then spread in a chain reaction that threw the United States into the longest Depression in its history.

The US wasn't alone; the European economies had already started to fall.  The Vienna Stock Exchange collapsed in May 1873, and this spread to the new German Reich in the Gründerkrach ("Founder's Crash), and thence to a France already struggling to pay the Indemnity imposed by the victorious Germans after teh Franco-Prussian War.  Europe's economies tanked.

So did America's.  A quarter of workers in New York City suddenly found themselves unemployed, back in the day before any sort of Government safety net.  The US Unemployment surged to a Million men, in a country whose population (men, women, and children) was still under 40 Million.  The Depression lasted 65 months, essentially for the entire decade of the 1870s.

An overheated Industrial expansion, an arrogant financial class that overextended in an effort to catch the Brass Ring, and a clueless Governing Class that made a huge, strategic mistake at precisely the wrong time - all contributed to what was perhaps the worst global economic crisis in history.

Greece has been "saved" by a Trillion dollar economic shot in the arm, despite riots in the streets caused by brutal austerity measures.  The riots have spread to Spain, who have also cut spending to the bone in an effort to stave off a similar crisis.  The question is not whether the Spanish government has cooked the books to make the problem look less severe - of course they have.  The question is how much worse is it than we've heard, and when will the other shoe drop?

And the Anglo Irish Bank seems to need a bailout that amounts to 21% of the Irish GDP.  That's like us bailing out Bank Of America to the tune of $3 Trillion.  But that's not the problem.  This is:


The only thing that is clear to me at this point is that if Ireland can't make it, they'll have to bail on the euro.  That's not a happy thought for Ireland; in many ways, the country has benefitted greatly from its membership in the euro zone, and the EU more broadly.  On the other hand, the mismatch between the business cycles in the Irish economy, and those of France and Germany, had a lot to do with getting Ireland into this mess:  monetary policy was far too loose for Ireland's overheating economy throughout much of the last decade, and it's now far too tight during the bust.


You underestimate the desire of the European political elite to prop up the shambling corpse, no matter what.

If limbs start falling off the body, then they have to ADMIT that it's a corpse that they've been building for 40 years, instead of pretending that it's a fresh dainty maiden (which is the only "truth" that they allow to be spoken).

And this is precisely the problem, on the eastern shores of the Atlantic.  Portugal, Ireland, Greece,and Spain (and maybe Italy, and almost certainly others) had no business in the Euro Zone.  These countried benefited enormously between 2000 and 2007, with incredible growth rates, but now are no better able to weather the contraction than the 1870s USA going off silver coinage.  The Euro Zone is fixin' to collapse, and many - and maybe all - countries will go off it sometime next year as a wave of economic disaster washes over the continent.  And this ignores the Carbon Tax that Europe's Green Elite is trying to ram down the continent's throat.

But like in 1873, Europe's contagion will spread to a weakened USA.  It's not Railroads that are overextended today, it's Mortgage Finance.  Instead of Jay Cooke and the Northern Pacific Railway, it's Barney Frank and Fannie Mae.  But it's overextended, and the collapse will ripple through the economy.

It's not for nothing that Economics is called the Dismal Science.  In a sense, this isn't Obama's fault - Barney Frank and Chris Dodd are much more to blame - but the meltdown here will end whatever chance he has of reelection in 2012.  The Democratic Party will also take the blame in that election, so the Republican Party is likely to control the White House and both houses of Congress in January 2013.

And there will be 20 Million unemployed.

As with 1873, a conjunction of an overheated Industrial expansion, an arrogant financial class that overextended in an effort to catch the Brass Ring, and a clueless Governing Class that made a huge, strategic mistake at precisely the wrong time will have brought disaster down on everyone.

That said, I'm more optimistic for the USA than for Europe.  We already have a million people taking to the streets in a populist revolt against the clueless governing class.  There's at least a chance that today's Tea Party movement - the people who clean up their own trash after their rallies on the Washington Mall - will deal with this in the ballot box.  Imagine a bunch of disgruntled populist Democrat voters joining a Tea Party already disgruntled with a Republican Establishment that really hasn't changed much between 2010 and 2012.  But we still might see the crisis through without blood in the streets, because of the innate sensibility of the American population.

Europe is screwed.  Their Demographics are collapsing, their political elites are morally and intellectually bankrupt, and a large, aggressive, and unassimilated immigrant population has temperatures already at a rolling boil.  Expect the first anti-muslim pogroms in a couple years, as the Elites find that they would rather have howling mobs burning immigrant women and children rather than the wives and children of the European Members of Parliament.

It's said that fascism is always descending on America, but always landing in Europe.  We're about to witness the abrupt and violent end of the Progressive Era.  It's not at all clear what will replace it, but the old Chinese curse applies in big, blinking neon letters:


May you live in Interesting Times.

More like "Ammo, silver and wheat"...
Gold's beyond any equitable reach at $1300, while silver's still undervalued at $21. Silver coins will be easier to "make change" with.
Right now an ounce of silver is the same price as a brick of .22's (at least here in God's country), both are about as good a deal as we're likely to see for a while and I plan to continue to buy both in such quantities as I can afford.

The collapse will be much worse in Europe than it will be here. I think there will be significant changes in our society. Some will be good, some will be terrible, few will be neutral.

I think one of the first things that will go, or maybe that SHOULD go is the entitlement culture that we could afford, but no longer can.

Our version of the pogrom will be against illegal immigrants, but it will be much softer than Europe's. Mostly it will consist of sending them back out of the country. Mexico will have to deal with it's own failed economy, not dump it's problems across the Rio Grande.

Actually, the French are doing a Trial Balloon by trying to expel some Gypsies. If it flies, then look for the Muslims and other "Foreigners" to be next. Also, after attending a seminar by some European Diplomats on my Campus, the general consensus is that it'll be a cold day in Hell before Turkey can join the EU.

But the nearer threat is south of the border. Did you see what happened in Ecuador when they tried to cut the Police's salaries? Looks like the Commies might win down there, then the Prols will start heading North towards us in much greater numbers than we've ever seen.