"I did not read Pasternak, but I condemn him."

Via Reason, Brad DeLong has a damning chart up: 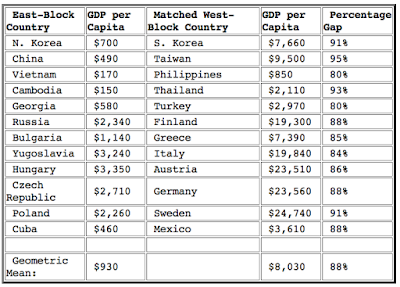 Material Well-Being in 1991: Matched Countries on Both Sides of the Iron Curtain

In his post, DeLong writes eloquently about non-economic issues, with pictures.  That got me thinking of Stalin's remark that one death is a tragedy, but a million deaths is a statistic.  The statistics are damning, but the soul crushing thought control that was the USSR deserves remembrance, too.

Boris Pasternak is best known for his novel Dr. Zhivago, which won the Nobel Prize in literature in 1958.  Considered Counter-Revolutionary, it ended Pasternak's career in the USSR.  He was forced to decline the Prize, and even had to refuse royalties from western publishers:

CC CPSU stands for Central Committee of the Communist Party of the Soviet Union.  Bill Mauldin, of "Willie and Joe" cartoon fame, won a Pulitzer Prize for this cartoon on the subject:


Only an appeal from Jawaharlal Nehru to Khrushchev himself saved Pasternak from exile.  I'm old enough to remember the joke from the 1960s:

The title of this post comes from the Soviet era joke about the situation.  Some joke.

One man is a tragedy, not a statistic.  But Pasternak wasn't alone.  Mario Vargas Llosa just won the Nobel Prize in Literature this year.  He has been a vocal critic of authoritarian left-wing governments, most famously his denunciation of Castro in 1970.  He saw the soul crushing need for the Socialist State to silence dissent, and spoke up about it when many western Intellectuals were happy to explain it away with "Better health care" or some such nonsense.

Many still do.  After all, it must be the malice or incompetence of individuals that led to this.  It couldn't possibly be a rotten system.  They clearly don't read TJIC:


if when you attempt to implement “wonderful communism” and every single frickin’ time you get mass murder, starvation, and gulags, then that is communism

The statistics are damning.  The lives behind the statistics - crushed by an Intellectual Machine that fears all dissenting views - those are even more damning.

It's worth remembering that this Intellectual Machine is wildly popular on University campuses world wide.
Posted by Borepatch