From Pokemon to Bayonets

When #2 Son was younger, we would go to the park or the playground. Now that he's going on 14, we can include more grown-up pursuits. He likes to go shooting with me, which gives us some great father-son time. 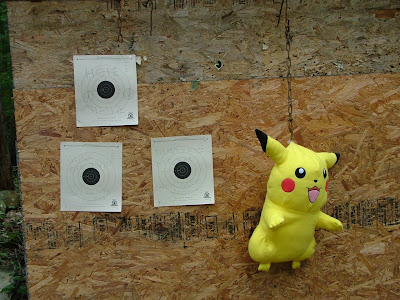 Click to embiggen. Yes, that's Pikachu. Lissa did some hand-crafting on the targets. We live in the People's Republic of Massachusetts, after all. But our super-secret off-site rendezvous was firmly in free territory: 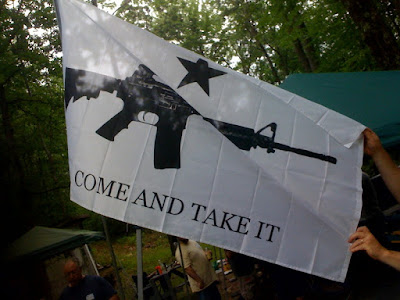 #2 Son has been sharing his toys with the New England Gunbloggers for a while now, and now it was time to put away childish things, and try things a little more, well, loud. He liked the AK-47 and MP5, but somehow gravitated to the SKS. He'd try other guns - Ruger Mark II, M1 Garand, several different shotguns, and a few others, but he would go back to the SKS every time. I guess I'll have to look into getting one.

So it was all SKS, all the time - until it was time to pick up my favorite rifle (SMLE) and make the obligatory bayonet charge:

Not bad for his first time with a bayonet. What he lacked in technique, he more than made up for in enthusiasm. The carnage was brutal - Pikachu actually became stuck to the backstop: 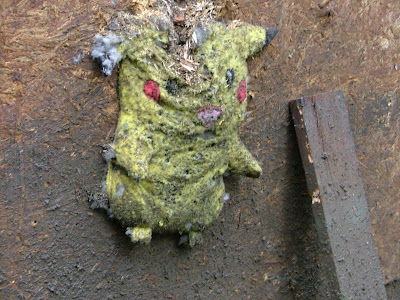 Thanks to all the New England Gunbloggers for being so generous with their guns and ammo, but more importantly with their time, showing a youngster the way to have fun while safely shooting their guns. And thanks to JayG for organizing the outing, and to Doubletrouble for offering a venue where we could breathe the scent of cordite, blowing on free air.

Good fun, but I'm very thankful that I have a shooting buddy. It's fun to go with yourself, but nothing beats spending some outdoor time with your kid.

I remember shooting with my dad the 1st time. I wish we would go shooting more often. Take in these times as much as you can. He'll remember them and onc day will share this same experience with his son or daughter.

BorePatch, I've got a video of Son #2 doing the bayonet charge from the side. I think it's a good video but it does show his face. Would you like me to post it or no? Up to you :)

After attending the Spring Bloggershoot w/AD I'm bummed that I couldn't get the day off for today's recoil therapy. But in honor of the occasion I did take my AR-15 to work today to do some shooting at the range next to the ambulance base!

It would be a public service to get your son a SKS :-)

For you to get him one

Hundreds of rounds of ammo, and 20 some armed people all in one place, and the only real injury was from a rusty nail...

I thought guns were dangerous!

Edge, you'll be pleased to know that an ECU Football hat was prominent at the blogshoot.

Lissa, go ahead. I've posted a couple pix of him before.

MedicMatthew, sorry to miss you. These sure are fun.

Buck, I may have to do just that.

I was one of thems once.

Awesome. So glad you both had a good time.

You *DID* tell Mrs. Borepatch that she was missed, right?

This made me smile :)