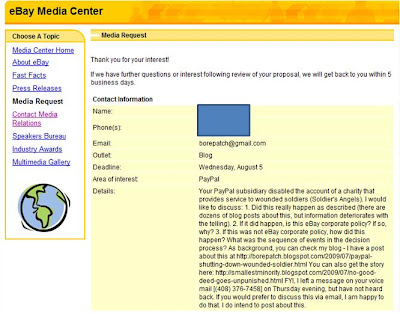 The back story, for those who haven't heard: PayPal (an eBay subsidiary) pulled the account of Soldier's Angels, a charity that helps out wounded soldiers. I thought this was strange - an Internet company seemed likely to have more sensitivity to the possibility of a ZOMG PayPal hatez wounded soldierz meme.

And so I asked them. If you click to embiggen, you'll see the inquiry I sent to their PR folks:

Your PayPal subsidiary disabled the account of a charity that provides service to wounded soldiers (Soldier's Angels). I would like to discuss:

1. Did this really happen as described (there are dozens of blog posts, but information deteriorates with the telling).

2. If it did, is this eBay corprorate policy? If so, why?

3. If this is not eBay corporate policy, how did this happen? What was the sequence of events in the decision process? [Information on links to the controversy omitted]

FYI, I left a message on your voice mail on Thursday evening, but have not heard back. I you would prefer to discuss this via email, I am happy to do that. I do intend to post about this.

I entered the same information a second time, via their web page, so this is two form requests and a phone call in a week. I haven't heard anything back.

So, what are the possibilities?

1. eBay actually does hate wounded soldiers. I actually don't think this is likely, but they haven't seen fit to offer evidence refuting this.

2. It was a bureaucratic SNAFU (probably what happened, IMHO). Which leads to the question of why they risked the ZOMG PayPal hatez wounded soldierz meme. We have a choice of answers, none of which is very flattering to eBay:

a. They don't care what people say about them. I know PR people, and think that this is unlikely in the extreme.

b. They care, but think this will blow over.

c. They care, but think that the blog community is small potatoes - too small to even bother with a reply.

In keeping with the old saying never ascribe to malice what is adequately explained by incompetence, I'm going with one of #2. That leaves the choice between arrogant, arrogant, or arrogant.

Now I'm the first to admit that my little corner of Al Gore's Intawebz is small potatoes. However, what they did was simply wrong, and they should - in my opinion - make things right with Soldier's Angels.

And so, to both my readers, I ask you to hit their PR Interview Request Form, and ask when they plan on making things right for their subsidiary's hasty and unthinking actions. After all, it's not about us or about them, it's about our wounded soldiers. Link to Kevin's post. Ask for a follow up from their PR team. Tell them that you plan to post about their response (or lack of response). I'd ask you to be polite, but instead think you should speak your mind; I've been polite, and haven't gotten a response. I probably could have not gotten a response by being impolite.

And please pass this around - post it on your blog for your readers, or email it to your friends. Let's give them the ZOMG PayPal hatez wounded soldierz meme if that's what it takes for them to do the right thing for Soldier's Angels.

I'd think that a company that stands and falls by community interaction over the Internet would be, well, a little more Internet-savvy.

We've managed to bypass PayPal! Another sponsor of the Rendezvous, LuckyGunner.com, an ammo site, is doing the on-line ticket sales for us with all proceeds (minus the 3% credit card fee) going to Soldiers' Angels. Soldiers' Angels is still taking phone orders for those who don't want to purchase on-line. Details here.

It would be nice if eBay/PayPal didn't keep acting like jerks, but the Internet has interpreted this little bit of censorship as damage, and has routed around it.

Both E-bay and PayPal have policies of not answering queries. On the rare occasions they do respond, it's with form letters approved by their legal beagles. On very, very rare occasions you will get a human.

I suspect their record of being sued for malfeasance has something to do with that. PayPal itself is on very shaky legal grounds, as it presents itself as a bank, which it's not. It's 'customers' have none of the legal protections of a traditional banking relationship, as thousands of folks have learned the hard way.

Given that... is it any surprise they won't talk about the things they do?

Good luck getting them to respond to ANYTHING. Paypal and Ebay are the turtles of the internet, when it comes to trouble.

Paypal is so hard-line anti gun that they pulled the plug on an entire charity because of one small subsidiary having a gun raffle to raise funds. I used to sell quite a bit of stuff via ebay, but do so no longer.

"...blog community is small potatoes - too small to even bother ..."

I forget how many years ago it was (maybe even just after PayPal was "brand new") that the word went out that PayPal was anti-gun and should not be supported by gun owners. So, I vowed never again to use PayPal. It was confusing to find that, over the years, PayPal was being used for many gunnie transactions. I passed on a couple of deals; the vendors said "PayPal only" and would not accept a credit card or a certified check as an alternative.

eBay has many times gone "anti gun", yet many gunnies still support eBay. I won't even browse eBay.

Everyone is entitled to do whatever they want, but since the word went out years ago that PayPal and eBay were anti-gun I have not supported PayPal or eBay. Should PayPal present evidence that this recent episode was some sort of mistake, I still will not use them.