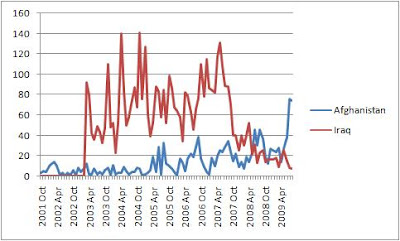 84 Coalition deaths in July and 81 in August; 76 and 74 of these were from Afghanistan. Afghanistan is shown in blue in the chart, and Iraq is shown in red.

What's stunning is the silence you hear in the media about this. What happened in September 2007, the last time the casualty lists were this long? Remember?

MoveOn.org's "General Betray Us" advertisement was condemned today by the U.S. Senate.

The anti-war group's full-page ad appeared in The New York Times last week as Gen. David Petraeus testified on Capitol Hill. It carried the headline "General Petraeus or General Betray Us? Cooking the books for the White House."

Other things that have fallen through the memory hole include:

It is time for the United States to leave Iraq, without any more delay than the Pentagon needs to organize an orderly exit.

Americans must be clear that Iraq, and the region around it, could be even bloodier and more chaotic after Americans leave. There could be reprisals against those who worked with American forces, further ethnic cleansing, even genocide. Potentially destabilizing refugee flows could hit Jordan and Syria. Iran and Turkey could be tempted to make power grabs. Perhaps most important, the invasion has created a new stronghold from which terrorist activity could proliferate.

(CBS/AP) The Senate debate on Iraq grew sharper Thursday when Majority Leader Harry Reid said the war had been lost and that President Bush's troop buildup is not stemming the rampant violence. That statement prompted Republicans to declare that Democrats do not support the troops in Iraq.

"I believe myself that the secretary of state, secretary of defense and — you have to make your own decisions as to what the president knows — (know) this war is lost and the surge is not accomplishing anything as indicated by the extreme violence in Iraq yesterday," said Reid.

OK, perhaps that's a bit unfair - after all, 137 coalition troops died that month, and worse was to come. But what about later, when things were clearly settling down?

Whatever the military success, and progress that may have been made, the surge didn’t accomplish its goal.

But where's MoveOn? Their web site is talking about a candlelight vigil, but don't get all excited: it's for the "victims" of our unreformed health care system. Nothing on the war.

Well, here's some noise. Don't forget who is still on the front line, defending us:

It is with great sadness that the Ministry of Defence must confirm that two soldiers from The Black Watch, 3rd Battalion The Royal Regiment of Scotland, have been killed in Afghanistan.

That was today, too. Those were Americans.

Keep them in your thoughts and prayers, that they come home soon, and safe, and victorious.
Posted by Borepatch

Well said. Not a day goes by that I don't feel grateful for their service ... and overpowering sadness for their sacrifices.

Fear not, Borepatch. Things aren't getting better in Afghanistan (yet), so President Feckless will soon start planning his exit strategy. Which consists of Cut and Run no doubt.