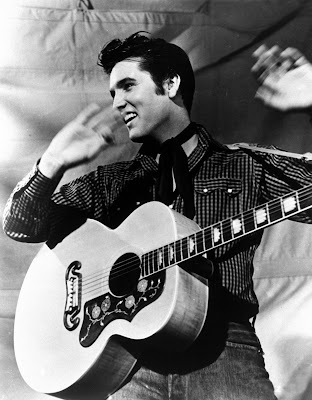 The King of Rock 'n Roll had roots in all sorts of music, including country. Rockabilly, at its heart, is an up-tempo fusion of country with R&B - so it's not surprising to find that Elvis recorded a lot of country music over the years.

In fact, he was inducted into the Country Music Hall of Fame in 1998.

But he always tried to put his own spin on a song. When he recorded his very first song, he was asked who he sounded like. I don't sound like nobody.

Looking back a half century, a lot of his music sounds dated (this is true for the Beatles, too). Even his "obscene" - Elvis the Pelvis - performances seem tame by today's standard, so it's easy to forget what a sensation he was and how he pushed music in a different direction than it had been going.

He didn't have the same influence over country music's sound - most of his country songs sound pretty, well, ordinary. Other people - including Johnny Cash and Patsy Cline - were to drive that in a different direction. Still, the breadth of music types he covered is a reflection of the day before radio market segmentation, and sub-segmentation. I remember a family vacation in 1967 when we drove from Maine to California and back, and the radio was a mix of country and Elvis and the Beatles and Sinatra. Now you can only get that from your iPod.

Today's song - Cheatin' Heart - needs no introduction. Other than I don't sound like nobody.

When tears come down...
Your cheatin' heart will tell on you

And just because on of my favorite of my kid's movies when they were little was Lilo and Stitch, here's the King to rock us out. Sorry, Stitch won't be making an appearance at a Blogshoot ...