I've been beating the drum on the shaky nature of climate science as it's currently practiced.  Beating it for a long time.  Ten years ago I put up the first significant global warming post.  I'm reposting it because the topic has been air brushed out of existence, and we should remember just how terribly weak the science is in this field.

The Science of Global Warming is settled. The next time you hear this, reply "YAD061".

Global Warming was a sensational story in the 1990s:

For decades the consensus view was that earth was very warm during the middle ages, got cold around the 17th century, and has been steadily warming since, to a level today probably a bit short of where we were in the Middle Ages. This was all flipped on its head by Michael Mann, who used tree ring studies to “prove” that the Medieval warm period, despite anecdotal evidence in the historic record (e.g. the name of Greenland) never existed, and that temperatures over the last 1000 years have been remarkably stable, shooting up only in the last 50 years to 1998 which he said was likely the hottest year of the last 1000 years. This is called the hockey stick analysis, for the shape of the curve. 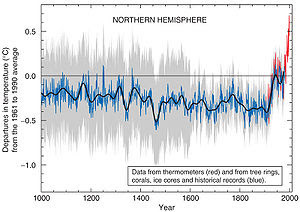 Mann based his analysis on bristlecone tree rings, which acted as a proxy for temperatures in times before we had thermometers. You may remember the graph in Al Gore's film "An Inconvenient Truth" - it featured prominently in stories in the press. The message was clear and simple: the climate has started changing suddenly and drastically, it's all our fault for generating industrial amounts of Carbon Dioxide, and we will permanently change the climate if we don't stop Right NOW.

The problem is that Mann's analysis was deeply - fatally - flawed. His computer model had a bug that caused even random data to produce a hockey stick shape. His data set was one clearly marked as inappropriate for use as a temperature proxy, but he used it anyway. When asked for his computer code and data, he refused. Ultimately the truth did come out, which is why you don't hear about "Global Warming" or "Hockey Sticks" any more.

None of this is news for long term readers - my introduction to the topic is here. [Update: there is an updated post here that is a better starting point - Borepatch]

This has put the scientists advocating for global warming in an odd position - they have been looking for new sources of temperature proxy records that show (at least in broad brush strokes) the same thing that Mann's study "showed". Recently, a fellow named Briffa published a study of Siberian tree ring cores from the Yamal peninsula that showed this same temperature curve. Well done, Briffa!

Except not so fast. Almost as soon as it was published, it started unraveling. There are now so many real scientists (not to mention intelligent laymen) skeptical of the theory of man-made global warming that many, many people started sifting through the report's data and methodology. As the Linux community likes to say about Open Source software quality, "Many eyeballs make bugs shallow."

The first problem turns out to be nothing short of astonishing. Briffa used cores from only ten trees. Ten.

The second is more subtle, but a picture is worth a thousand words. Of the ten cores, how many show variations more than what is obviously random? One. 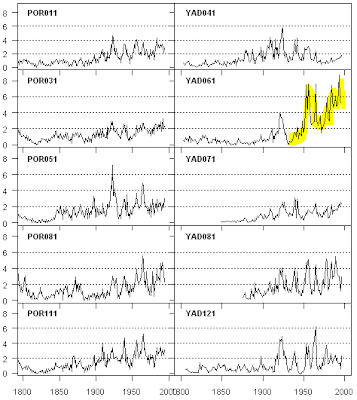 That is tree #YAD061. Seems like an outlier, that should be discarded from the analysis, right? That's not what Bifra did. Keeping it in, the average of the group was raised a little. Just a little, but enough.

Remember, the whole "Climate is increasing catastrophically" discussion revolves around just a couple of degrees increase over a century. YAD061 varied from the group average by eight standard deviations, which was enough to get that sudden, couple of degree rise for the group. (Look at the line highlighted in yellow).

We have a multi-trillion dollar proposed restructuring of society, based on tree #YAD061.

Back in the Dark Ages, when I was a wee lad at State U, I had to learn Ockham's Razor: entia non sunt multiplicanda praeter necessitatem* (yes, we had to learn it in Latin - this was history of science):

Carl Sagan's story about an invisible, non-corporeal, flying dragon that spits heatless fire is an accessible demonstration of Ockham's Razor. Sure, a dragon like that could exist, but that's not where the Smart Money bets. The Smart Money bets on "the dragon doesn't exist", which explains the situation just as well, without introducing a lot of added, unproven hypotheses.

So let's think about this tree, YAD061. Maybe it sees massive global warming - 8 degrees in 70 years - when none of the others do. Maybe. Is there a simpler explanation, that doesn't require us to explain why the other 9 didn't see warming?

Yes there is, and you have each seen it with your own eyes:

YAD061 looks very much like a tree that grew up in the shade of its elders, and therefore grew slowly, until age or ice-storms or insects removed the elders and the shade. Then, with sunshine and the rotting remains of its elders to feed it, the tree could take off.
I have seen growth patterns much like YAD061 in the rings of many stumps in New Hampshire, and not once have I thought it showed a sign of global warming, or of increased levels of CO2 in the air. Rather the cause is far more simple: A childhood in the under-story, followed by a tree’s “day in the sun.”
Dr. Briffa should spend less time gazing at computer screens, and actually get out and associate with trees more.

So, we see a perfectly normal tree experiencing a perfectly normal arborial lifestyle. We see a scientist who uses such a pitifully small number of trees in his sample that YAD061's perfectly ordinary growth pattern throws off the group results, in a way that the scientist can use to justify his old Hockey Stick model.

Who are you going to believe, Dr. Briffa or your lieing eyes?

So the next time you hear those words the science is settled, tell them "Me and YAD061 say it ain't." And then ask them The Question: what's the difference between an invisible, flying, non-corporeal Hockey Stick that breathes heatless fire, and no Hockey Stick at all?

* OK, OK, it's usually translated as "entities should not be multiplied unnecessarily".

"Not finding a bug" sounds quite a bit more flattering than "defrauding the world for profit."

Typical... rather than throw out the outliers they made them CENTRAL to the whole bs...

The temperature data is falsified.
The tree rings are from one side of one carefully selected tree.
The ice cores show warming before CO2 rises.
Sea level rise has been steady and unchanging for 800 years.
It is now cooler than it was 800 years ago.