The B-17 that crashed yesterday - killing seven and critically injuring another three - was Nine-O-Nine.  It came to the local airport near Castle Borepatch a year ago. 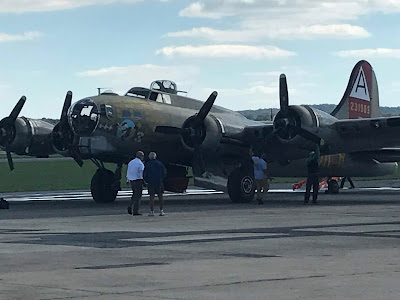 It's weird to think that I have been in this bird, and now it's crashed.  Here's a video I took of Nine-O-Nine taking off.

Rest in peace to those who died in the crash.

The old warbirds belong in museums as static displays. I hate to say it, because I love them too... but their day is over. The people that built them and flew them are gone. Now, 909 is gone too.

Just like vintage cars, they should not just sit in the museum. They need to be exercised and experienced. Only when you fly in one can you truly appreciate what the guys that took them into combat.

Now I hear that the NTSB wants to review the training logs of the Pilots. Sure, they signed up at the local fight school for Training in Flying Multi engine piston driven airplanes with manual non-hydraulic flight controls and analog instruments. Right …. Classes held every Thursday.

Those pilots most likely had more fight hours in that aircraft than most of the pilots that survived the war. They helped rebuild that bird, and knew it inside out and backwards.... and now some NTSB bureaucrat is going to second guess what they did to try to bring it back in one piece.

The airframes will have a serviceable lifespan and when that is reached, they should be retired.
BTW how many DC3s are still in the air?
B52s?
I say the B17s have another 100 yrs.
MD-737s have crashed.

That's the second warbird from that show to crash. The P-51 trainer crashed last year. I'm glad my son and I saw them while we could.

She went down on October 2nd in Connecticut.

She was doing display flights and giving demo rides in Nashua NH on Sept 29th.

During those demo flights in Nashua, she flew almost directly overhead my house each time: we're less than a half-mile northeast of the approach to Boire Field in Nashua, where the Wings of Freedom Tour was taking place (Sept 27-29).

The house shook on each pass.

May she and her crew fly with the angels.

Given the chance to fly in either 9-0-9 or "The Dragon's Tail" B-24, I chose the latter, but watched up close as the -17 coughed and fired up all four engines.
That was several years ago.
I'll be watching with interest to see how the accident investigation unfolds. I'm reminded of a DC-3 in St. Louis that finally got airborne after 3 aborted takeoff attempts, only to crash and kill pilot and copilot. It had just been refueled with Jet A.
People are dead and a piece of history is gone.
How sad.