I've had some great commenters lately, discussing ways to improve shooting accuracy. Random Acts of Patriotism had a good suggestion - shoot a .22 with iron sights at a reduced target at 25 yards. Seems this is one of the ways the military trains (or trained) recruits before putting them on a 300 yard range.

So #2 son and I went to the range yesterday, with new targets. Same size, but with three different pictures on each (thus, the reduced target size). We shot a sweet Ruger M77/22, just like the one shown here. 10 round magazine, bolt action.

This is a great gun, and is one of #2 son's favorites. It's light, has a great trigger, no recoil at all (it's chambered in .22LR, remember), and good iron sights. This is a great gun to start a kid on - you can load it single shot when you open the bolt, rather than using the magazine.

Now we don't actually own a gun (yet, long story), so we go to a range where we can rent. It's fun to try lots of different ones, and has been great finding which we like best. The downside is that you never get used to any one gun, so the first couple of targets are often pretty pathetic. Offered for your consideration, target #1. 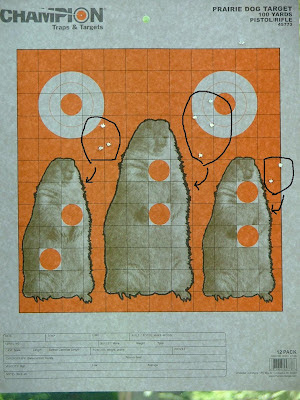 High and to the right, all the time. Prairie Dogs do not ph33r me, even after 150 round of practice. So, correct left and down. This is probably not how you should do it - like aiming 20 degrees left on the golf course because you have a slice, but it gets me on target, at least more so. 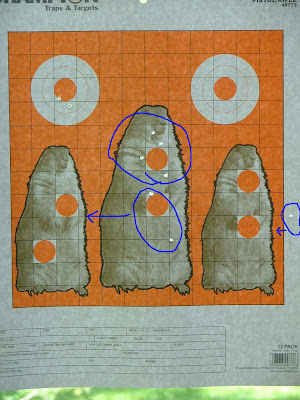 The odd thing is that the only one of the pictures that I could see even a little was the middle one. I'm not sure if I'm getting old enough that my eyes can't get a picture of the smaller targets, but I was pretty dead-on for the middle varmint. Just couldn't locate the other two.

I'd hate to have to get prescription shooting glasses. #2 son had no such problem, as you can see from his target. While it may not look too impressive, it was with a pistol. 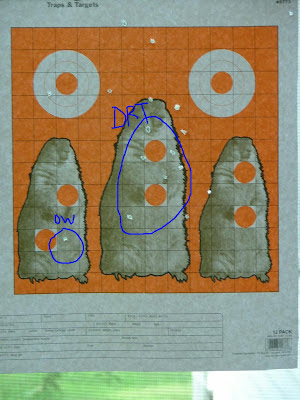 So any thoughts out there? When you reach my advanced years, is unscoped shooting not as practical?

UPDATE 4 Aug 2008 0845: Random Acts of Patriotism has a really information-rich post in reply to many of the questions here. Boy, Al Gore's intarwebz may turn me into a good shot yet!
Posted by Borepatch

Since I had a hand in this, and thanks for trying it, btw, I would like to offer what advice I can.

Look for a post on my blog, and I'll discuss iron sights, sight picture and alignment, targets, etc.

You can do it, as long you're not blind. What you focus on is the front sight, whatever it is. This lets the rear sight be fuzzy, and the target be fuzzy, just the front sight is sharp. Then you develop habits that allow you to get the same sight picture every time. I'll write up that much, with the understanding you're using rental guns and shooting from the bench.
But, I'm a long way off, and whatever skill I have at teaching this, I know I can't fully teach it long distance. You need to find someone who shoots military service rifle competitions, and get them to work with you and your son.
It isn't hard to be pretty good. It's frustrating and complex to be excellent. I'm pretty good.

I'm in the same boat. Not only do I have a hard time identifying distant targets, but I can't focus on things if they are too close.

What I've started doing is wearing mild prescription reading glasses whenever I'm trying to do precision shooting. They allow me to...and, indeed, force me to...focus on the front sight. The target is blurry, but as long as you have an idea of what it's supposed to look like and where on the target you want to hit, you can be accurate that way.

I haven't posted the results of the e-postal matches yet, but that's the method I used to shoot it. I couldn't really see the targets at all, but I knew about where on the paper I needed to hit, I used the reading glasses to focus on the sight and aimed for spots on the paper. I think I did extremely well using that method.

If you wear glasses already, you may have to have a special prescription made up just for shooting.

I am officially a member at a range near my house as of this evening.

The offer is hereby extended to you (and progeny) should you prefer to spend your money on gasoline rather than firearms rentals.

And you get to go shooting with a guy who's known the blogosphere over as "The guy who attacked a teletubby with a bayonet".

How can you refuse?

Jay, I'm all in. Actually, should save on gas, too - happy to contribute that to your ammo fund.