I wrote this last year and it's posted in the side bar, but the Usual Suspects® are howling at the moon for new gun control laws.  Allrightee then, here is what I'm looking for in that "conversation".


I don't object to gun control.  What I object to is stupid and useless gun control.Unfortunately, all we seem to hear are stupid and useless gun control proposals.  As a public service, here are two simple rules you can use to figure out whether a gun control proposal is stupid and useless:Rule #1.  Can the person proposing the law state what they think the law will accomplish? Most of the time it seems that they can't.  For example, what good would banning bump stocks do?  They were (maybe) used in one crime in the Republic's history.  Is the goal really to prevent something that has only happened once?  Really?Rule #2.  Can the person proposing the law state how likely the law is to accomplish the goal from Rule #1?  Considering that you can make a bump stock from a string and a key ring, is it rational to ban bump stocks? That's it - two simple rules to identify non-stupid and non-useless gun control laws.  So let's use these rules to look at some gun control laws and see if they're stupid or not:1994 Assault Weapons Ban.  Stupid.  The law was supposed to stop people from buying military style semi-automatic rifles.  It didn't.  The AR platform is likely the most popular rifle in America, and was so during the "ban".  The Department of Justice said that the ban had precisely zeroeffect on gun crime.Gun Free School Zones.  Stupid.  It was supposed to stop people from taking guns into schools.  That sure worked great, didn't it?I could go on with this, but you can add your own.  My point, though, is that the gun control proposals (magazine size restrictions, one gun a month purchase limits, etc.) are stupid and useless.  I'm willing to leave open the possibility that some gun control proposals could be non-stupid, at least in theory.  But I sure haven't seen any yet. 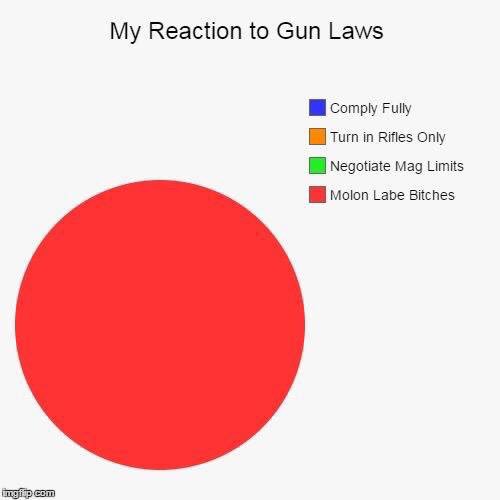 I've been thinking about this a lot today. In addition to the events you mention we've also had a situation locally with more of a domestic angle. Five dead. Also a crazy person. Not that it matters but the weapons were handgun and shotgun.

It's got me wondering if there is any common ground on this question. Sure, if you could magic away high capacity mags you might have mass shootings with fewer victims. Would any of the politicians now showing such passion be willing to stand up later and say "Only six school children dead. That's Progress!"

Until you can address the darkness in the heart of our times these events will continue. I do think trying to minimize the damage is a worthy topic of discussion. But that's palliative care not a cure.

Will those who see things very differently be willing to consider restricting the rights of mentally ill people? (Assuming we had some reliable marker for who is going to descend to this level of monstrosity). How many lives of same do we damage to - in theory - save a given number of innocents? A ten to one ratio? A hundred? A thousand? What price for an innocent life?

Would a Concealed Carry Plus program be acceptable? A few hundred thousand citizen volunteers willing to undergo regular training, to guarantee safe storage at all times in exchange for exemption from No Gun zones?

I don't know. The very concept of taking your personal grudges out on the innocent is so evil that I can't imagine how we've let it grow and prosper.

Apologies in advance if I offend some. No offense was intended. One virtue I've always appreciated from my conservative fellow citizens is a general willingness to at least listen respectfully.

You're clearly right on the specific point. Any attempt to ban something will just lead people to evade the law. And technology has to be considered. The people who say that the Founding Fathers were considering single shot muskets, or at worst small cannons with grapeshot, have a point. Modern weapons held by people with modern dark hearts can kill many more. Of course they then miss the point by ignoring the reality of technology continuing to change. 3D printed magazines and weapons. And Lord knows what else in another decade. We may look back in a generation and say that guns were not so bad compared to DIY bioweapons.

I was just musing as to whether there was anything that could be done on the tech side of the issue because without it there is little chance that the other side of things, the human part, will even be considered. I think btw that you, I and most other conservative types would be the first to put ourselves in harms way if innocent lives were being threatened.

I'd just like to say that it's nice that the discussion on a highly contentious subject is polite and thoughtful. This country would be better if there was more of that.

"The people who say that the Founding Fathers were considering single shot muskets, or at worst small cannons with grapeshot, have a point."

No, they are showing they are ignorant of history.
The founders were well aware of guns with multiple shot capability. In fact, they placed an order with an inventor for a musket with what was essentially a "chain-fire" system. Pull the trigger, and about 8 shots with a hesitation between them. Never got into production, though. His prototype was demonstrated to them, however. There were other designs older than that that they knew of, some of them in England's London Tower.