As a public service, here are two simple rules you can use to figure out whether a gun control proposal is stupid and useless:Rule #1.  Can the person proposing the law state what they think the law will accomplish? Most of the time it seems that they can't.  For example, what good would banning bump stocks do?  They were (maybe) used in one crime in the Republic's history.  Is the goal really to prevent something that has only happened once?  Really?Rule #2.  Can the person proposing the law state how likely the law is to accomplish the goal from Rule #1?  Considering that you can make a bump stock from a string and a key ring, is it rational to ban bump stocks?

Everyone - including the GOP in general and President Trump in particular - are proposing "Red Flag" laws to prevent the purchase of guns by the mentally ill.  Since so many people are talking about this, does it pass the "stupid and useless" test?

It seems like it passes the first test, in that people are articulating (admittedly vaguely) that these are intended to keep guns out of the hands of nutcases.  It's pretty hard to argue against this, at least in theory.  And so we proceed to the second test - does it seem that the hypothetical laws will actually work?

And this is where it goes down in flames.  The Parkland shooter was known to be a nutcase, having been reported to the local police some four dozen times (and twice to the FBI).  Nobody took action, because the local (and likely national) government agencies thought that doing so would screw up the crime statistical goals that they were trying to achieve.  While it's very early after the event, it appears that lots of people knew that the Dayton shooter was a nutcase.  Nobody did anything.  The Air Force dishonorably discharged a guy because he was, well, a nutcase - but forgot to update the NCIC database with this information.  The nutcase was able to buy a gun and kill a bunch of people in a church.

These are just the examples that come to mind; presumably a thorough analysis my the media or by social scientists would turn up many more examples.  Of course, the media and social scientists don't want to look into this because it would hurt their push for more gun control.

And so we see that "Red Flag" laws are stupid, because we know that the Organs Of The State that will be entrusted to enforce these are incompetent or ideologically corrupt, or both:

Now comes the news that the head of the Department of Homeland Security officially thanked the Governor of Missuri for violating state law by illegally passing to the DHS Missouri’s list of concealed-carry permit holders. The Governor then lied about his actions.
The Feds, meanwhile, continue to illegally retain transfer records from federally licensed firearms dealers past the statutory time limit, among several other continuing violations of a 1986 law forbidding the establishment of a national gun registry.
The BATF also criminally violated its authorizing laws by transferring over 2000 firearms to Mexican drug gangs through illegal straw purchases (google “ATF gunwalking scandal”). Over 150 Mexican citizens and United States Border Patrol Agent Brian Terry were killed with these guns.
Meanwhile, following scandals about “drop guns” at the sites of police shootings, some big-city police forces (notably in LA and NYC) are strongly suspected of routinely using planted guns to frame suspects they can’t otherwise nail on firearms-possession charges.
Any trust that “gun control” will be administered with even minimal respect for civil rights is long gone, destroyed by the behavior of the enforcers themselves.

No doubt the response to this will be whining that "we have to do something!"  Really?  Should we do something stupid and useless?  That doesn't sound right at all.

And it's worse than this.  These laws will open the floodgates to all sorts of mischief:


There is nuance to be had here, for sure, but realize that it is an abrogation of due process to invert the order of “innocent until proven guilty” to “somewhat guilty until proven innocent.” The question isn’t whether these laws do this, the question is whether you feel comfortable giving up a cornerstone of our republic for a safety dependent upon enforcement by a government that has failed at this before.

How do you craft a law that cannot be used maliciously - say, by a disgruntled ex-spouse, by a political opponent, by violent organizations like Antifa?  Perhaps it's because I've worked so long in the field of Internet Security, but there's a world of difference in thinking how something should work in terms of desired functionality and how something can be made to work in unexpected ways.  The unwritten First Law of Internet Security seems to apply in spades here: sometimes it's easier not to do something stupid than it is to do something smart.

The opportunity for mischief here is a huge red flag (so to speak) and once the precedent of "guilty until proven innocent" is established as settled law in one field it's hard to see how it would not soon spread to laws that have nothing to do with firearms.

So "Red Flag" gun control laws are stupid.  They're also dangerous - and dangerous in unpredictable ways.  Republicans are playing with fire on this; they've been telling everyone that Democrats want to take away their guns with stupid gun laws, and yet they seem to be lining up behind a stupid gun law that will be abused to take away people's guns. 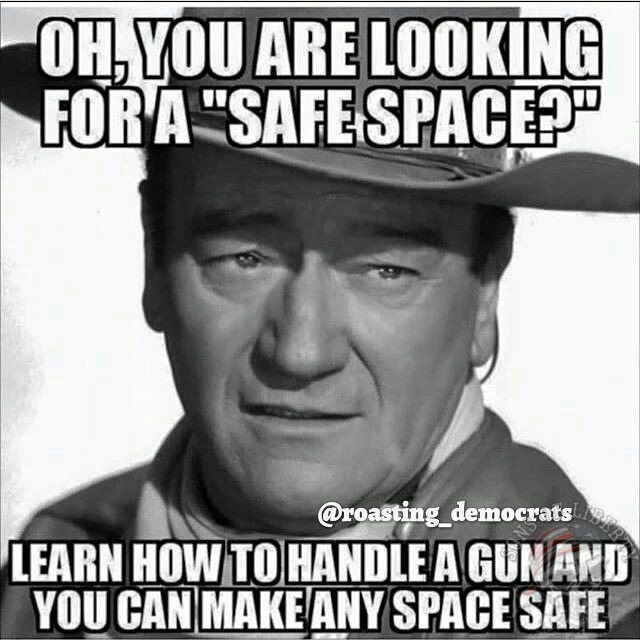 UPDATE 8 August 2019 13:49: Not even 24 hours later and we see lefties planning to abuse these laws.
Posted by Borepatch

If someone is a big enough danger that they shouldn't have guns, the solution to that is to lock the person up, arraign them, and set a trial date.
But that triggers long-standing protections of innocence, right to counsel, cross examining witnesses, etc., and there are penalties for false accusations.

But seizing guns, other than being blatantly illegal, sidesteps all those constitutional and jurisprudential common law protections, and now treats gun like wads of found cash on a traffic stop, and makes them guilty until proven innocent.

Which was the whole point all along.

Oh, and if someone knocks on my door asking for/demanding my guns, like all redcoats and JBTs, they'll get them bullets first. They'll prove their point, but it's going to cost them some cops.

Someone claiming "he's unsafe" now has the burden to proof to show articulable cause, beyond their untrained vague suspicions (or malicious perjury), and if they can be and are sued for deprivation of civil rights, and automatically criminally tried on penalty of a few years in jail, for all accusations not upheld by a court with counsel for both sides present, and the burden of proof on the prosecution, we can talk. But at that point, you didn't need the red flag law in the first place, did you?

But they aren't written that way.
These are "shoot first, ask questions later" laws, they don't pass the most cursory smell test, and they violate every principle of common and written law going back to Magna Carta.

And anybody on the executive side who dies or is injured or crippled enforcing them deserves whatever happens to them, and then their families.

"Just following orders" ran out of steam as a legal defense in Nuremberg around 1946.

Anybody who gets put on a mental health hold can only have that happen if a very limited subset of the population makes the application, they have to be able to document it in writing, and they have a narrow window to prove that case, or the person walks.

And any accusations sufficient to take the guns would have to meet the standards of a mental health hold, and entitle the state to lock up the person, not their guns.

So if you have actual objective grounds (danger to self, or danger to others), supported by direct observation of actions or the verbatim statements of the accused, why wouldn't you lock up the nutbag for evaluation by psychological professionals, instead of disarming them???

The only purpose of these laws is to paper over unlawful disarmament that would pass neither the most cursory glance to support a psych hold nor any application for a warrant from even the most rubber-stamping judge.

In short, they are the tools of a police state, in a banana republic.

Red flag laws are unconstitutional, and contrary to the tenets of law since forever.

Our medical records are online. If someone was treated for depression 30 years ago, will that being a red flag law into affect? I believe it will - these laws are about as unconstitutional as you can get.

The biggest reason that I oppose red flag laws is not the theory, but the execution. I picture red flag laws working like Facebook bans: There will be no real criteria that you can point to that will get you flagged, but you will find out when the police knock on the door to take your guns. Then you will have to hire an attorney and pay several thousand dollars to get your guns back. Meanwhile, is has cost the accuser nothing.

One only needs to look at how domestic violence accusations work.

Colorado's RFL is noxious and focused on confiscation rather than mental health. Mental health provisions were glommed on when people started noticing the imbalance. In effect 01/01/20, this adds oomph to my retirement and exit. Those people deserve what they voted for, good and hard.

Americans have been satisfied with judges having the ability to violate due process for decades (at least). "Red flag" laws are yet another step in that direction. We're already well on the way down that slope.

The frog is already in the water, the stove is on, and the water is heating up. One can only wonder whether the frog will commit suicide by staying in the water, or whether it will jump out of the pot and into the face of the human controlling the heat.

If you really want to know how the red flag laws will work, you don't have to look any further than the asset forfeiture laws. Most of the people that are trapped by the AF laws don't have the means to get their assets back - many, if not most, of those trapped by the RF laws will also not have the means to get their firearms back - and the "evidence" used to initiate a red flag forfeiture will devolve into what we see in asset forfeitures.