Belief in Global Warming depends on trusting the temperature databases

A few weeks back I posted that the so-called "record" heatwave was nothing of the kind:


Oh, hum.  Here's a prediction: not a single US State will register a record high temperature during this heat wave.  None. 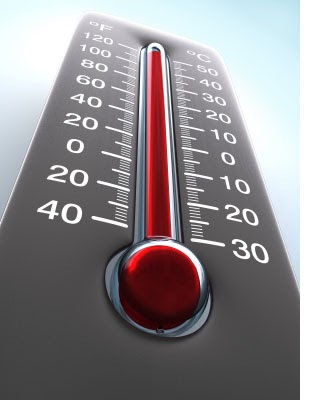 You want to see a real heat wave?  Look at July 1936.  ElevenStates set high temperature records that stand to this day.  That Wikipedia page is a little shifty on this, trying to hide the decline in record temperatures.  You'll see an asterisk next to South Dakota, which the Wiki page says means Also on earlier date or dates in that state.  So what was that earlier date for South Dakota?  July 1936.
Oh, and three more States set high temperature records the next month, August 1936.  That makes 14 out of the 50 States suffered record high temperatures in the summer of 1936.  That's almost 30% of the States.

The Wikipedia page confirms that no record high temperatures were set last month in the 50 United States.  No records have been set at all in the entirety of 2019 except for one: a record low temperature of -38°F in East St. Louis, IL.  That's the lowest temperature ever recorded in the Land Of Lincoln.

You'd think that with all this jibber-jabber about THERMAGEDDON!!!!11!!eleventy!! that we'd see record high temperatures, not record low temperatures.  It kind of makes you wonder what the scientists mean about "hottest ever".  I mean, how do they go about calculating this when the records were all set (hey, 15 out of 50 State records in July-August 1936 is about as close as we'll ever see to "hottest ever")?

They change the data, that's how they do it.  They "adjust" the measured ("raw") data in mystical and magical ways that they don't fully explain.  This adjustment has the effect of lowering older temperatures and raising current temperatures.  No doubt this is entirely above board and they'll get right onto a detailed explanation and justification.  Any day now.

I've been writing about this for a long, long time:


So, a major government climate data set is adjusting recent years temperature reading upward, at an increasing rate. This implies that the data as collected at the sensors is getting increasingly inaccurate - after all, we're seeing adjustments on the order of 0.5°F for the 1990s, so the sensors are clearly reading almost half a degree cold.Does this make any sense? And notice how the sensors are "running cold", never hot, despite the fact that cities have grown much larger since 1960, and many once-rural weather stations are now surrounded by hot asphalt parking lot, rather than cooler meadow? Does that make any sense?Let's look at this further.The Fed.Gov says that the lower 48 states have warmed on average by 0.6° between 1940 and 1999. Of that, 0.5° is from adjustments, not from raw data. In other words, 83% of the warming is from adjustments. Well, now.They say that they have a good explanation. Maybe they do - I'm still fighting off a bad case of "Meh", so let's ask another question: do we see anything like this other places than USHCN?We do indeed. A week ago, a group called the Climate Science Coalition of New Zealand made a bombshell announcement: all of New Zealand's reported 1°C warming between 1850 and 2000 was due to adjustments.

That last item ended up being pretty interesting.  In their court filings, the Kiwi weather bureau (National Institute of Water and Atmospheric Research, or NIWA) claimed that they were never responsible for the database.  Not theirs at all, nosiree.  And pay no attention to their previous press releases about it all.

And so to trust:


A question that is not (yet) being asked about climate change is how would someone create a scientific consensus in the absence of solid data and computer models? Trusting trust.Dr. Jones and the CRU team are in control of one of the main data sets that all climate scientists use in their analyses (referred to as HadCRUt; the other major one is NASA's GISStemp - note that NASA's Gavin Schmidt features prominently in the CRU emails as a member of the "Hockey Team").What is clear about the HadCRUt (as well as GISStemp) is that they are opaque - the data sets are terribly hard to understand, poorly documented, and adjusted in a manner that is not well explained (if, indeed, it is explained at all). In the case of CRU, the original (unmodified) data is no longer available, but seems to have been destroyed.Yet ever single climate scientist uses these data sets for their analysis of global temperature.So, if the guardians of these data sets were to want to ensure a scientific consensus that the globe is warming, that this is a recent phenomenon, and that mankind is behind it, all they need to do is modify the data sets. All researchers pick up the modified data sets, have no (easy) way to validate the soundness of the data, and unsurprisingly produce similar results. Hey, the data show conclusively that the planet is warming. Oh noes! Thermageddon!

But Borepatch, I hear you ask, why would a scientist do this?  Well, ideology has been a motivator for as long as we've had ideologies.  But Ockham's Razor says that the simplest explanation is the best explanation, and that means money.  We know that the ClimateGate team got millions of dollars in government funding.  We know that governments have spent around $100B (yes, that's billion) on climate research.  We have seen scientists publicly discussing how this government funding is corrupting the scientific community.  We see governments proposing $50T (yes, that's trillion) "solutions" to the "problem" of global warming.

If the science really were so clear and settled, you'd think that the scientists would make their work clear.  Instead, it's a mill of statistical gobbledy-gook that makes it really hard for other scientists to unpack and to replicate.  And do you know what a scientific discovery that can't be replicated is called? Hint: it's not called "scientific".

And if temperature is at an all time high, wouldn't we see some temperature records being set?  Me, I trust the records, because it's very obvious if someone adjusts them.  There's transparency there, unlike in the rest of the climate data.
Posted by Borepatch

Did you see the story when Australian National University Climate scientist Sophie Lewis said that climate models are not falsifiable? And went on to say that Climate Science is not falsifiable.

To paraphrase what you said, "do you know what non-falsifiable means? Not scientific".


WUWT had the story: https://wattsupwiththat.com/2017/08/10/claim-climate-science-does-not-have-to-be-falsifiable/

To comment additionally about Australians, well, remember how Climate Change and Rising Sea Levels was destroying the Great Barrier Reef?

Uh, yeah, DEATH TO THE WORLD not!

My own personal view on Globull warmheatdeath...

In the 1890's, pineapples were a major export from the east coast of Florida, then it got too cold...

Up to the mid 1970's, citrus was a major export from Florida groves found all the way north to the FL-GA border, then it got too cold. I remember driving up I-75 and you could see dead groves from Orlando all the way north. Dead, dead, and so dead even the root stock was dead.

Now? It's too cold in the winter for even many Indian River groves (the best citrus in the world, IMHO) to survive.

When I moved to Gainesville (hwack-ptooie! It's like Berkeley or Austin, except worse) in 1985, August temps were 'Expect to see days of over 100 degree temps, maybe weeks.' Now? It's the end of the world if it gets up to 95...

And my mom's house, on the beach near the Cape, should be under water by now, right? Notsomuch...

Yet, when you tell people this you can hear the bones on the outside of their ears grow and clamp their listening holes shut. And if you go to the library, well, funny that old copies of newspapers are no longer available... It's on the web, right? (No, old temps are not.)

How can you trust people who can't predict the weather for tomorrow about the weather 10 years or 100 years from now?

Once again, the Farmers' Almanac is better at climate studies than the so-called professionals.

I just want to point out that the thermometer in the image is wrong. -40 is the same on both scales, but we see -40F opposite -30C.

In South Texas, in the early 80's, some of those cold fronts reached all the way to Brownsville, TX and even Florida. I recall temperatures in the mid teens for an entire week three years in a row in late December or so.

In the last 15 years so, it has snowed twice, 2004 and 2017 in December. North Padre Island is still there and more building. Ditto for South Padre.

But if I were to listen to the warmunist, Padre Island should have already become the world's longest sandbar.

All you need todo is listen closely when the daily report quotes the History.. it's always the same Yesterday we broke the record …….. was that record set last year or last month ….. No, invariably it's sometime 60 to 80 years ago ….. so Just a minute..... so your saying that 60 to 80 years ago it was also this hot, right??? Thankyou you just demonstrated that the whole premise of AGW is wrong,

The wonderment is tha they have not reached out to put their organ in UAH and destroy that database.