If you look closely at climate data, you will find that all the major data sets consist of two parts:

Raw Data, which is the instrument reading: satellite, thermometer, or proxy (tree ring, ice core, etc). This is data straight from the sensor.

Adjustments, which are corrections applied to raw data to adjust for inconsistencies. For example, it is important to read the thermometer temperature at the same time every day. If the hottest time of the day is, say, 2:30 PM, but you read the thermometer at 10:00 AM, then the day's reading will be low. Adjustments are also made when weather stations are re-sited, and for other reasons.

An interesting question is how much of the 20th Century's warming came from adjustments, rather than from raw data? A picture is worth a thousand words:

This is not from the Hadley/CRU temperature data set, this is from the US HCN (Historical Climate Network), which describes itself as:

The United States Historical Climatology Network (USHCN) is a high-quality data set of daily and monthly records of basic meteorological variables from 1218 observing stations across the 48 contiguous United States. Daily data include observations of maximum and minimum temperature, precipitation amount, snowfall amount, and snow depth; monthly data consist of monthly-averaged maximum, minimum, and mean temperature and total monthly precipitation. Most of these stations are U.S. Cooperative Observing Network stations located generally in rural locations, while some are National Weather Service First-Order stations that are often located in more urbanized environments. The USHCN has been developed over the years at the National Oceanic and Atmospheric Administration's (NOAA) National Climatic Data Center (NCDC) to assist in the detection of regional climate change. Furthermore, it has been widely used in analyzing U.S. climte [sic].

So, a major government climate data set is adjusting recent years temperature reading upward, at an increasing rate. This implies that the data as collected at the sensors is getting increasingly inaccurate - after all, we're seeing adjustments on the order of 0.5°F for the 1990s, so the sensors are clearly reading almost half a degree cold.

Does this make any sense? And notice how the sensors are "running cold", never hot, despite the fact that cities have grown much larger since 1960, and many once-rural weather stations are now surrounded by hot asphalt parking lot, rather than cooler meadow? Does that make any sense?

Let's look at this further.

They say that they have a good explanation. Maybe they do - I'm still fighting off a bad case of "Meh", so let's ask another question: do we see anything like this other places than USHCN?

We do indeed. A week ago, a group called the Climate Science Coalition of New Zealand made a bombshell announcement: all of New Zealand's reported 1°C warming between 1850 and 2000 was due to adjustments. Here's the New Zealand National Institute of Water and Atmospheric Research (NIWA) reported warming graph:

The Climate Science Coalition folks went back and looked at the raw data by itself. It looks different: 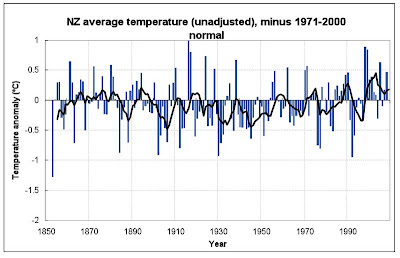 Well, well, well. OK, so it looks like the Kiwis and the Yanks have crummy government scientists. Sweden, too. Who else is in the club? How about the CRU? Actually, we can't tell what their adjustments look like, because they've lost all the raw data. Sorry about that.

Eric Raymond has been running the CRU code (unlike me, who just pretended to run the code as an excuse to snark). The code generates the adjustments made to the CRU data, and guess what it looks like? 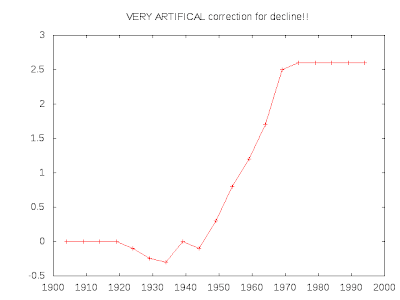 That's not the temperature, remember, it's the adjustments made to the temperature. I think we've just discovered the real source of Anthropogenic Global Warming. It's not CO2, but it is a lot of hot air.

Like I said recently, almost every climate scientist uses data from one of a very small number of data sets. If the people who control the data sets can inject a warming signal, then you will indeed reach a consensus that the climate has been warming. All scientists using those data sets will find the warming signal. The science will, in a sense, be "settled".

It will be wrong, but it will be settled.

The fact is that we can’t account for the lack of warming at the moment and it is a travesty that we can’t. The CERES data published in the August BAMS 09 supplement on 2008 shows there should be even more warming: but the data are surely wrong.

The data are surely wrong, because the science is settled. I mean, everyone sees a warming signal!

At this point, climate science in general and Anthropogenic Global Warming in particular are shattered. Nothing in the peer-reviewed journals can be trusted. Any climate data that is not available to John Q Public needs to be dismissed out of hand. Any adjustment process that is not 100% transparent - fully documented procedures, as well as adjustments published on a station-by-station basis, with a justification for each change - needs to be dismissed out of hand.

Science has weathered scandals of this magnitude in the past, and come out the stronger for it. It has done this by insisting on full transparency. It needs to do so now.

Global Warming is confirmed to exist, and to be caused by Man. Unfortunately, it's caused by Men in White Lab coats, not by burning Carbon based fuels.

Borepatch, I think you (and almost everybody else) is consistently misinterpreting that quote about "the data are surely wrong." To me, it seems clear that "the data" is referring to the CERES data -- that is, it's the data that shows there should be even more warming that is surely wrong.

At this point, climate science in general and Anthropogenic Global Warming in particular are shattered. Nothing in the peer-reviewed journals can be trusted.