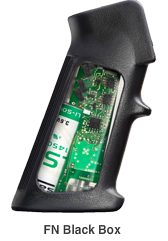 FN even calls it a Black Box, which they say will make life easier for a weapons manager or an armorer. It will count how many shots have been fired, whether full automatic or semi-automatic, burst rates and lengths, firing sequences, and blockages. Syncs with GPS, so you'll know where you were when you had your last FTF.

While they say it will fit "any weapon type", it looks like it's really only useful for EBR-style firearms, and even then it's hard to see how anyone other than the military would care.

The folks running Land Warrior likely will like this, since there's plenty of tactical/wearable networking available to integrate this.

But I don't see this as being enough of a win for armors to justify the expense. So what's the deal? I hope it's not this:

So far, so uncontroversial. But FN seem to hint at other uses to which the gizmo might be put - indeed the choice of name offers a broad hint that investigations following a shooting or a firefight might make use of the records held in weapons used. Monitoring might go further than this, with the company saying:

The FN Black Box can also communicate useful information to the chain of command during a mission. It contains the identification number of the weapon and, thus, can indirectly identify the soldier. When coupled to a GPS, it can transmit its identification and localization data to the upper level of the command through the communication equipment of the soldier.

Maybe I'm nasty and suspicious in my old age, but I simply don't trust a Democratic administration not to consider the troops guilty until proven innocent. In all honesty, I'm not sure I think that a Republican administration wouldn't throw the troops under the bus the instant the MSM said something mean about them.

And I for sure don't think that the Generals in the E Ring would stick their necks out to keep the troops in their commands from being railroaded.

Of course, if I really were nasty and suspicious, I'd think that this is part of a strategy by the Democratic Party to destroy the Volunteer Service and bring back the draft. I'm glad to see that I'm actually not that nasty and suspicious, but this might be able to do it.
Posted by Borepatch

"It contains the identification number of the weapon and, thus, can indirectly identify the soldier."

We really need to take the warning labels off of *everything* so dummies like that one have more opportunities to weed themselves out.

Have faith BP, by the time they are able to build one to meet government specs, it will be the size of a B52 and cost more than a F18.