Ten years ago today I put up what in my mind is my first significant post about climate science, discussing the problems in the climate data sets.  It certainly hasn't been the last - dodgy data sets is a drum that I've beaten until it broke, because this is the key central issue in climate science.  It is no less so today than a decade ago.

The science is settled, but there's no data

Ever wonder how scientists measure temperature? With all the talk about Anthropogenic Global Warming (AGW), have you ever thought about where the data comes from? Somebody has to collect temperature data, right? So how do they do it?

Well, how do you measure temperature? If you're like me, you look at a thermometer.

So how many thermometers are being used to measure all of this AGW? I mean, if "the science is settled", someone should have an answer, right? Well, someone does have an answer, and it's quite interesting. 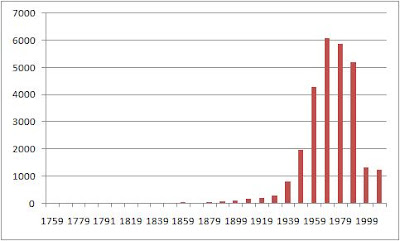 There are a lot of thermometers, at weather stations around the world. There didn't used to be, though. Until World War I, there were less than a thousand. World wide. Then there was a huge expansion of the number of weather stations, to a peak of over 13,000 during the Cold War. Note that this is the count of how many thermometers are in the 3000 longest continually operating weather stations. There are a lot (maybe 10,000) of new ones, but since the AGW debate is pretty uninteresting if you only look at the last 40 years, this is where the theory will be made or broken. (Actually, the data is very interesting, and suggests strongly that the new thermometers have thrown off the averages and may indeed account for 100% of the warming trend. You should readthe series of posts here, which include not only data, but source code).

This tells us several things:

1. There are not many weather stations that have been consistently measuring temperature in the same location for more than about 60 years. Maybe a thousand, maybe a little more.

2. There are very few weather stations that have been consistently measuring temperature in the same location for over a hundred years. Two or three hundred, tops.

3. There are almost no weather stations that have been consistently measuring temperature data in the same location since the end of the Civil War - essentially around the time when the Industrial Revolution was in full swing most places in North American and Europe, and everyone started belching CO2 into the air. Maybe 30 or 40.

Think about that last one - thirty or forty weather stations. That's what this whole AGW debate is centered on. A few dozen.

OK, so there really aren't many measurement locations. For those from which we have data, where's the data? Can we look at it? Check it for mistakes? I mean, after all this is supposed to be the biggest crisis in human history, the very survival of the human race is at stake, and we HAVE TO DO SOMETHING RIGHT NOW. Okay, but first can we look at the data?

Well, no. It's not that the scientists don't want to share it with you.  They don't, but that doesn't matter. You see, it seems that the original data sets have gone missing:


Data storage availability in the 1980s meant that we were not able to keep the multiple sources for some sites, only the station series after adjustment for homogeneity issues. We, therefore, do not hold the original raw data but only the value-added (i.e. quality controlled and homogenized) data. The priorities we use when merging data from the same station from different sources are discussed in some of the literature cited below.

Oh, and that last link? It's not to your run of the mill right wing tool/hater site; it's to ground zero of AGW research.  Nature has a good post about the refusal to release the data, with a very interesting comments thread. The comments are running around 20 to 1 in favor of releasing the data so it can be verified.

The story is summed up nicely by Kenneth Green:


In a nutshell, the story is this. Canadian Steve McIntyre, co-demolisher of Michael Mann’s hockey stick chart, has been after the CRU to let him review their original climate data. For those unfamiliar with Steve, he is like a dog with a bone when it comes to data, and to validating statistical methodologies used in data representation. To come to Steve’s analytical attention is a bit like coming to the attention of a 60-Minutes news crew, only a few hundred times worse, particularly if you have anything to hide.
So Steve politely (He is Canadian, after all) requested the climate data from CRU, only to be refused on the grounds that he is not in academia. That’s where the story gets interesting, because Roger Pielke Jr. (who IS in academia), put in his own request, and was also turned down. Not because he didn’t qualify, but because the CRU apparently didn’t bother keeping the original climate data used in compiling the first surface temperature record!
...
In other words, there is now no way to test to see whether any of the “homogenizing” that has been done to the original record biased it in any way, or whether any of the subsequent “adjustments” to the data for things like urban expansion, and such can be validated.

Maybe $50 Trillion is being asked for to "fix" the problem, but don't worry, you can trust them. I mean, it's not like they have data or anything, but it's an emergency. Srlsy.

The questions about data quality are very, very serious, and the entire AGW debate is scientifically meaningless without an examination of the data, the methods, the mathematical models (especially the statistics, which are subtle and easy to mess up), and the source code of the climate models.

This last one in particular is an area I have relevant experience in, although we look for errors that cause security vulnerabilities. However, it's a truism that there will be at least one bug per 1000 lines of source code. How many lines of code are in the models? The process of higher math will tell us how many bugs to expect. How many of these would impact the results? You simply can't know until you look at it.

You say that the science is settled? Then give me the the data.

Thanks to Don for the pointer to post about data sets. Don knows a thing or two about data.
Posted by Borepatch

Yes, but according to NPR, AGW is Science™, and people who don't believe in Science™ like AGW and more guns = more violence are dangerous.

Asking for original data is heresy. Questioning doctrine is apostasy. You must report to the Inquisitor.