The summer of 1940 was a dark time for the British Empire.  The "Miracle of Dunkirk" had rescued 300,000 of their army troops from certain capture by the Wehrmacht, but they had to leave essentially all their equipment behind.  The British Army looked around for inexpensive and quick to produce weapons for the returned soldiers and new recruits.

They bought Thompson sub machine guns in as large a quantity as they could get (or afford), but it wasn't nearly enough.  In desperation, they turned to Maj. Reginald V. Shepherd and draftsman Harold Turpin, who designed this dandy little gun at the Royal Armory at Enfield.  Their initials (S and T) along with the first two from Enfield (EN) gave the gun its name.

It was the opposite of the Thompson, which was nose bleedingly expensive due to the extensive machining required in its manufacture.  With only 47 separate parts, Shepherd's and Turpin's gun was made out of stamped steel, with almost no machining required and only a little welding.  Basically any metal shop in the realm could knock the STEN out, and they were cheap as chips - the first ones only cost 15 shillings - maybe $10 in 1940s money.

As you'd imagine, it was butt ugly.  Nothing but stamped metal, a handgrip that's, well, unique (although not uncomfortable), and a pipe stock instead of the "shoulder thing that goes up". 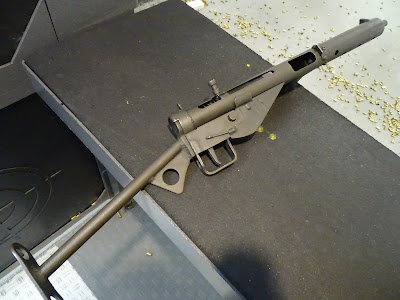 But in the dark days after Dunkirk, it was an Ugly Duckling. 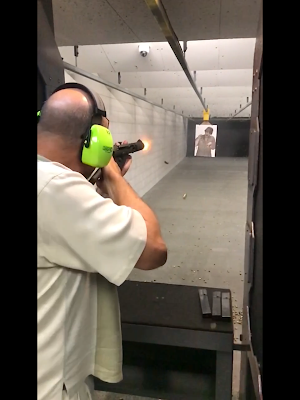 Nice shot by The Queen Of The World, catching multiple expended brass cartridges in the air.

This gun was not designed for long range, aimed fire: instead, it was purely a short range weapon for putting a lot of rounds down range.  It did this admirably.  The indoor range I shot at was 25 yards, but the STEN wasn't going to be accurate past 100 yards anyway.  I usually try to take pictures of the sight picture but here it was beside the point - a front post welded on the barrel and a peep rear sight probably wouldn't have been used in action anyway.  Certainly at close range it did the job: 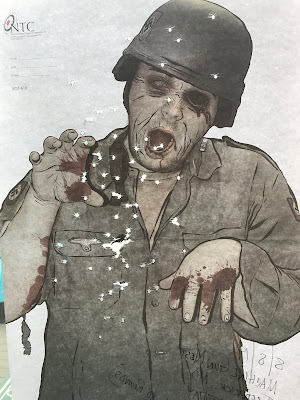 Yeah, it's a Nazi Zombie.  80 rounds didn't take long at 500 rounds per minute.  And they probably didn't weigh much more than ten rounds of 12 gauge, although as T-Bolt says a shottie is the worst anti-zombie weapon ever.  For a swarm of zombies, you could do a lot worse than a STEN.  You see, it's a very easy gun to fire:


There is essentially no felt recoil, and there is no muzzle rise at all.  I wasn't even really braced like you normally would for hand held automatic fire, and I didn't need to be.   When it counts, the Ugly Duckling turns into a swan.  If I practiced with 500 - 1000 rounds then I expect I could keep all 80 rounds in a palm sized area at that range, and I'm not a particularly good shot.

And did I mention that they were cheap as chips to manufacture?  You could probably pick up everything you needed to make one at Home Depot, for $50.  The action is dead simple, firing from an open bolt - when you pull the trigger the bolt slides forward, stripping the next round from the magazine, chambering it, and firing it.  The recoil pushes the bolt back, ejecting the case, and driving the bolt back until it is stopped by the recoil spring.  Lather, rinse, and repeat until the rounds are all expended or you let off the trigger.

The "grip" is, well, unique.  It's a little stamped plate welded to the gun.  It's a lot more comfortable than it looks, and when I was shooting the gun I didn't even notice.  You can see the select fire lever (basically a thick wire) right above the trigger.  There's no safety, other than the safety that you keep stored between your ears. 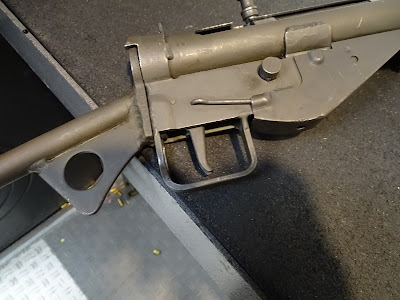 The magazine loads from the left side which would be handy if you wanted to hit the dirt to avoid incoming fire.  The magazine itself fit pretty loosely and if you held onto it then you'd get a lot of failure to feed jams.  I held onto the 2 inch magazine insert port which is (again) stamped metal welded onto the gun.  The esthetics were nothing to write home about but it worked really well. 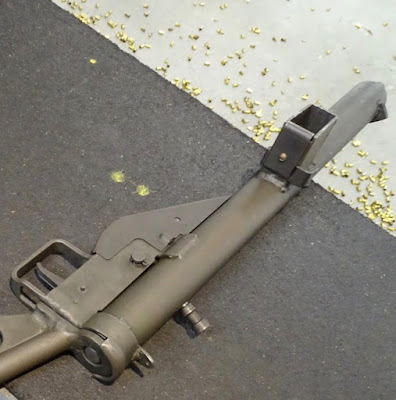 You can also see the rear peep sight and the front post.  In all honesty they probably could have left these off the gun for as useful as they would be.  It would no doubt have saved another shilling that way.

The Queen Of The World took me to shoot this at The Machinegun Nest in Frederick, MD.  I'm not usually a fan of automatic fire as there's really no hope for much accuracy and you have to pay for the ammo (well, unless you're at Uncle Sam's Summer Camp; Dad used to talk wistfully about shooting the M3 "Grease Gun" in his Army days).  But TQOTW paid for the ammo, so it was surprisingly guilt free. And with absolutely no muzzle rise, the accuracy made it even more guilt free.  It was a fabulous birthday present.

If you're in the area, I highly recommend The Machinegun Nest.  It's very well organized and there's a good selection of both automatic and semi automatic guns to rent.  The supervision was excellent to keep even novices out of trouble.  Also, they have Date Night on Fridays, so our young Gentlemen readers can take their young Lady friends to a unique experience.  Don't be afraid of trying the STEN, ladies - it looks like an Ugly Duckling but shoots like a swan.

I'm not a shooting teacher, although I do like to introduce people to shooting.Maybe some day I'll take the NRA teaching class, but until then, you get a dilettante's view. You'll get opinion here, but if you get serious about shooting, you'll want to get someone who knows what he's doing to give you some pointers. It can help.

Thanks for posting this! As a history nerd, I've always been fascinated by the Sten, and wondered how it fired.

And now, in Australia, motorcycle gangs are making money building Stens, Owens, Grease Guns and Mac10s using common machine tools. Without rifled barrels, for the most part. And doing a bang-up job making them, too.

Beans, this looks like it would be dead simple to manufacture.

Timmeehh, it looks like the price ranged from 15 shillings to a couple of pounds, for $3 - $8 or so. Probably a couple hundred dollars US today. I was shocked at how well it shot for that price. Of course, it probably couldn't hit a barn at 200 yards, but that's not what it was designed to so.

I belong to a group interested in 80% builds, but a lot of guys build from the ground up.
I've seen a couple home brew STENs.
They actually look better than that. :)

I remember the first time I saw a STEN. It was in an old Tarzan movie when I was a kid.
I wondered who would build a gun with the mag sticking out the side.

Didn’t some have a folding stock BP?

Makes you think about just how hard it is going to be to stop the signal.

I know the Sterling, which dates me, but never fired a Sten. Nice one!

Bloke on the Range, on You Tube, has a video on handling and firing the Sten. It is semi-automatic but the handling would be the same. I think he is British living in Switzerland.

#1 Son has a membership there. He loves the place, and goes about twice a month. Unfortunately, he's not 21 yet, so they won't let him play with the really nice toys.

Bob at 3:16 - it actually takes more work to make a Sten be semi than be full auto, from what the gun-machinists say.

And, yeah, there are plans out on the web for Sten/Owen/Sterling/M3 style SMGs, including complete parts lists from your local hardware store. That are capable of being made using a Dremel, a grinder, a hammer, and a drill. With the right attachments, you don't even need a dremel or a grinder, though expect to kill a cheap drill doing it all. The days of needing a full machine shop or smithy are over.

Though having 2-3 mills, a collection of lathes, a handful of drillpresses of various sizes and power, multiple grinders, welders, and all the tooling that goes along with a well-equipped shop (and the knowledge to use it) does help. But isn't needed.

Years ago, I got to to shoot one on based in Scotland, the one I shot DID exhibit a little bit of muzzle rise, but the 'trick' supposedly wasn't to grip the forend. Just let it 'bounce' on your hand. And no, not very accurate.

You have a great wife.

Got sent to a joint forces thing in Berlin (back when there wre East and West versions). I brought an M3, the Brit brought a Sterling, can't for the life of me recall what the Frog brought, or even if a Frog participated, and the German Polizie brought whatever was then the current H&K model.

What good fun that was. The H&K was by far the most advanced, the M3 the fugliest and slowest rate of fire. There is no way on earth shooting any SMG can't be great fun. It was almost embarrassing to be the one providing the M3 for the party. But I always loved shooting the M3. The slower rate of fire worked well for me when firing full auto for some reason - i could put more rounds in a tighter group with it firing auto. And you didn't need a selector, shooting it semi was a breeze, just pull and release the trigger.