The response to technological surprise

Often, the response is to classify the embarrassing outcome.  World War II saw the Japanese Army intercept American walkie-talkie traffic on Okinawa, leading to the ambush of and almost wiping out of the 193rd Tank Battalion. 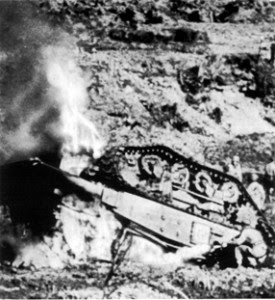 The most important truth of this battle was that American troops suffered a technological surprise. The Japanese were listening to the SCR-300, SCR-500 and SCR-600 series frequency modulated (FM) radios of American infsntry, tanks and artillery forward observers at Kakuza Ridge (and other battles through out the Pacific in 1945) with Japanese Type 94 (1934) Mark 6 walkie-talkie radio that was issued to every Japanese infantry battalion.

MacArthur’s forces in Luzon and Mindanao discovered this fact when artillery forward observers in Luzon started hearing Japanese Army radio traffic and attempts to spoof artillery calls for fire that failed with mutual cursing in broken English between American and Japanese units.

So why was this hushed up?


The second fearful symmetry was discovering that the military and political elites of Truman Administration were no different from our current elites in using wartime classification and post-war lies of omission to hide their mistakes from history. It is quite clear that American knowledge of Imperial Japanese monitoring of our FM communications would have played a huge role in the cancelled invasion of Kyushu, but our elites did not want to admit anything about it.

How many other things were they unwilling to talk about and buried?

The question, of course, is how many things are being hushed up right now for precisely the same reasons.  And this sure sounds right:


Last, there are two lessons for American military and political elites here.

1) Technological surprise can happen at any time. The Chinese use of internet to penetrate American military (Think US Army’s digital “blue force tracker” to nuclear firing orders) and civilian infrastructure communications plus the growing availability of operational research data analysis software to non-state actors needs to be taken much more seriously.

2) The biggest technological surprise of this research is that both 20th and 21st Century elites can no longer hide their mistakes.

This is a very interesting analysis of bureaucratic inertia.
Posted by Borepatch

And we may find out 'sooner' rather than later... sigh