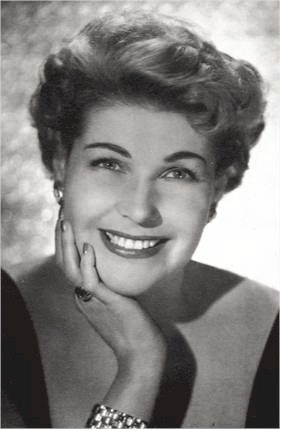 The Nazis didn't care whether someone was a fabulous soprano (and rather dishy, it must be said).  They cared about whether Jewish blood flowed in the veins.  And so Hilde Güden found herself at the Metropolitan Opera.

A native of Vienna, she was quickly recognized as a formidable talent.  She made her debut at the Wien Volksoper immediately before the outbreak of the Second World War, then it was off to the Zurich Opera and thence to Munich.  She was perhaps the preeminent soprano for Strauss and Mozart.

But she was rumored to have Jewish ancestors, and the Gestapo was closing in.  She used forged papers to avoid arrest and escaped.

After the war she made the rounds of the great European Opera houses, ending up at the Salzburg Festival, the Vienna Staatsoper, and ultimately the Met in New York.  She was widely recorded, and I'm sorry that she retired from singing before I noticed that Mom listened to the Texaco Metropolitan Opera Radio Network on Saturday afternoons.

Here she is singing what was perhaps her signature role from the Met in 1958.

Too bad the recording isn't better. A lovely voice and a beautiful woman.