If computer programming languages were cars

This is pretty old (I have a hard copy that compares smalltalk to a Cooper Mini), but it's still fun.  And it's been updated from the days when I (mumble card punch mumble) did a lot of my bit grinding:


Ada   is a tank. A butt-ugly tank that never breaks down. People laugh uncontrollably if you tell them you drive Ada, but really, do you want to be driving a sports car in a war zone?

Somewhere in my hard copy files I have "How to write C in Ada".  It spends two pages setting up pragmas to be able to handle a simple main {}, but at that point it's Real Code for Real People.  Err, or something.


C   is a racing car that goes incredibly fast but breaks down every fifty miles.

C is said to either be the grade that its inventor got in Computer Science class, or the fact that "A" and "B" didn't quite work.  It was very closely related to assembly language, maybe a half step above - so you have all of the incomprehensibility with about 60% of the speed.


Assembly Language:   you are the car.

Remember. there is no spoon.


Java   is a family station wagon. It's easy to drive, it's not too fast, and you can't hurt yourself.


Lisp   looks like a car, but with enough tweaking you can turn it into a pretty effective airplane or submarine.

I heard that the LISP acronym stood for "Lots of Insipid, Stupid Parenthases."  I worked with some old buddies at Three Letter Agency to get one of my old LISP programs declassified for all y'all.  All they'd declassify was the last page of the code.  Here you go. 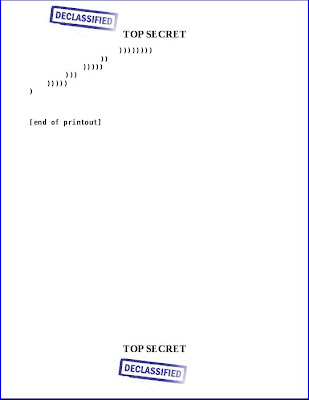 Ruby   is a car that was formed when the Perl, Python and Smalltalk cars were involved in a three-way collision. A Japanese mechanic found the pieces and put together a car which many drivers think is better than the sum of the parts. Other drivers, however, grumble that a lot of the controls of the Ruby car have been duplicated or triplicated, with some of the duplicate controls doing slightly different things in odd circumstances, making the car harder to drive than it ought to be.

About right, that one.  So there you are.  RTWT to get the full geekery.
Posted by Borepatch

Labels: i am a nerd, techie geekdom, techpr0n

Oh man, just about right on the money, and I'll take Ada because it IS a tank!!!

I had always heard that Java was "Write Once, Debug Everywhere."

Perl of course is a write-only language.