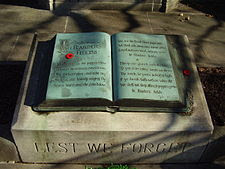 The Requiem Mass (missa pro defunctus) is the traditional remembrance ceremony in the Catholic Church.  Since today's Veteran's Day is more properly known as Remembrance Day, the Requiem is the proper form of music for this morning.  Fortunately, this is a long held tradition offering a wealth of musical choices.  Mozart's unfinished one is perhaps most famous, but Fauré's is my favorite - we sang this when I was in the Choir at State U* and I've enjoyed it ever since.

I've posted on Fauré just a short while ago, and so won't recap his history again here.  Instead, the veterans who fought and died are the object of the day's meditation.  Fauré was old when the War to End All Wars staggered to a close at the 11th hour of the 11th day of the 11th month.  His native France suffered terribly, as did the Commonwealth (and the German Reich, as a reading of All Quiet on the Western Front will attest).  Not even two decades later the world found that soldiers were still needed.

They still are.  We call these men (and women) heroes because they put themselves in harm's way.  They run towards the sound of gunfire, and too many never came back.  Today is a day to say a prayer for these dead, perhaps calling on those ancient words of the Mass to remember the departed.

And an extra prayer may be in the spirit of the day as well: Donna nobis pacem.  Grant us peace.

* It's not that my voice was ever very good but they were trying to get a Choir going and I was a Male with a pulse.  While they have been much too good for folks with my talent for a long, long time, that was good enough back then.  Of course, the music major chicks were the draw back then.  Not a bad idea if you're trying to start up a Choir and you're looking for Baritones with a pulse.
Posted by Borepatch

Peter, I provided a helpful link to Remembrance Day. ;-)