The definition of "expert"

Is someone five minutes ahead of Insty. Of course, he has to cover everything. I pride myself on being your one-stop shop for all your Internet Security and Zombie needs ...

Now, anyone who's been in tech will remember the term blinkenlights, from this sign that has been posted in just about every engineering lab in the free world:

What's interesting is that the Chaos Computer Club - a group of German computer guys, hackers in the good meaning of the term - did this for real, on a huge scale, and Internet accessible.

They thought that if you were to wire each office in an office building so that you could have a central computer turn each office's light on or off, it would essentially make the building into the world's largest LCD billboard. If you made a little graphics language, it would be easy to program the computer to draw pictures (or even little animations). If you made the computer Internet-accessible, then you wouldn't have to be in Germany to program it.

They called it The Blinkenlights Project, and you can find it here. 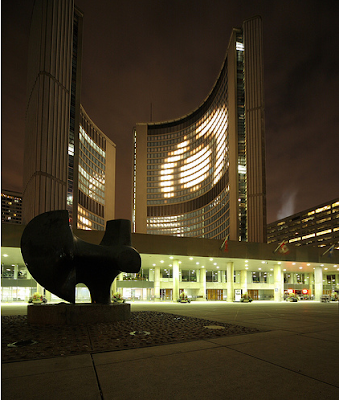 This is all above board (unlike the ZOMG! Zombies!!!1! road sign), done with the cooperation of the building owners. They've done buildings in Hamburg, Paris, and most recently Toronto.

So, Bad Hacker - No biscuit! (but funny as all get out). And Good hacker! Well done you! All from programmable signs. Remember folks, signs don't inform people: people inform people.

There's an analogy in there, just on the tip of my tongue, if I could only recall it ...
Posted by Borepatch