The Left Arm of God has a statue

Sandy Koufax was called "The Left Arm of God" because he was simply unhittable.  In four incredible seasons between 1963 and 1966 he won the Cy Young award every year, won 25 games in three of those seasons, and was World Series MVP.  The last season say him win 27 with a nifty 1.73 ERA and 27 complete games (!!!!).

He finished his career at age 30, with his arm blown out.  But even not able to pitch like he still clocked a career ERA of 2.76 and a 165-87.  His premature retirement from overwork is the poster child for the pitcher abuse that was the standard back in those days.  Typically a pitcher needs to have 300 wins to get voted into the Hall of Fame; the fact that Koufax was inducted with half of this shows just how dominant her was.

But you almost never see a pitcher pitch a complete game today.  The reason for middle relief and closers can be found in his shortened career.

Over the weekend, the Dodgers unveiled a statue to him.  He's led a quiet life, shunning the limelight.  My first reaction was "Sandy Koufax is still alive?"  Yes indeed:

Hall of Famer ﻿Sandy Koufax﻿ has played an enormous role in Dodgers history. It would be easy to argue that he’s the best pitcher to ever wear Dodger Blue. His No. 32 was one of the first retired by the organization, along with Jackie Robinson’s No. 42 and Roy Campanella’s No. 39.

On Saturday, Koufax and his famous leg kick were forever immortalized at Dodger Stadium as he became the second player to get a statue in the center-field plaza. Koufax joined Robinson, who received the first statue in Dodger Stadium history back in 2015. 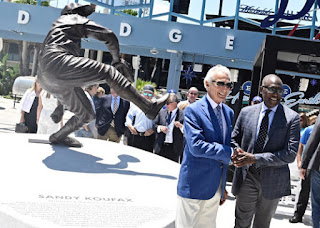 Not only did he win all those Cy Young's, he did it when there was just ONE for all of MLB, not for each league !!!
Not to be pedantic but, he won 63 65,66.
Far short on wins, but one of the most dominant pitchers ever !!

He still lives in greater L.A., quietly, and shuns interviews and press.
But he literally pitched until his arm was nearly rotting off.

In the day, with Drysdale, there was nothing like Mr. K, and the Big D.
He deserves the statue.

Looks like this one got written in a hurry and wasn't proofread properly. Or got auto-corrected to hell...

And he was followed in the rotation by Don Drysdale.

Not THAT is "an action figure." Would love to see a 360 degree clip of it.

"Torre played against Koufax during the 1960s, and he opened his remarks with a quip, "I have to be careful how I word things, because I say I *hit* against Sandy Koufax, but I have to take that back. I *faced* Sandy Koufax.""

Thanks for posting -- I had no idea!