There must be something in the water or something.  First, Tam posts about the F-82 twin Mustang fighter.  I posted about it quite a while back, but Tam's idea is pretty cool.

Next up, Mr. Garibaldi posts about a DARPA project for a hybrid ground effect/seaplane heavy lifter that could deliver cargo all the way across the Pacific ocean in a day.  It is also twin fuselage. 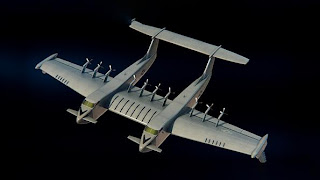 Lastly, via a Wikiwander I wan across a twin fuselage variant of the Messerschmitt BF-109.  The Z or "Zwilling" version was an interceptor which would have been armed with five 30mm cannon which would have been a bad day for the Eighth Air Force.  Only one seems to have been built and it was destroyed in an air raid before it could fly. 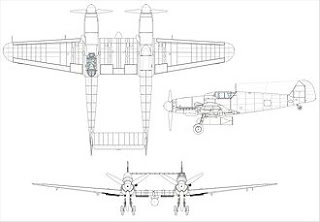 Pretty strange to find all of this all at the same time.

The DARPA project looks like one of Brunelli's blended wing models from the 1930s. Northrop's YB49 became the B2 stealth, so reaching back for a design has history. Not too many original designs around these days.

I dunno -- looks like a dangerous concept to me. If the pilot on the right decides to turn right and the pilot on the left turns left, does the plane split apart? Maybe that's why you don't see these planes now. But wouldn't there be twice as many if that happens?
Asking for a friend...

At least the Zwilling ('twin') would be easier to land. If I remember correctly, more BF-109's were lost on landing than were shot down.

My fervent hope is that people realize I was kidding in my previous post, but if you get to Titusville Florida you can see an buy one of the two F-82s still around and flying. Bring 10 million dollars with you and it is yours.

But still, what if one pilot wants to go to Cleveland and the other to Tampa????Anyway....

This weekend we are going to the Collings Foundation open house in Hudson, Massachusetts for the Father's Day event -- a great take and a chance to talk with veterans who are docents for Mr. Collings' fabulous collection of planes, tanks and cars. It is safe to say virtually every reader of this blog would enjoy the visit as well.

It reminds me of the Ekranoplan, and has a similar goal.