I have been remiss in not posting this week about Queen Elizabeth's Diamond Jubilee.  She is now #3 on Wikipedia's list of longest reigning monarchs, and in a week will move into the #2 slot. I do not know the protocol on whether to offer congratulations to Her Majesty but there is no doubt at all that her reign has left the monarchy stronger.  In an era of globalization she remains wildly popular to her subjects.  That's quite an achievement, perhaps unique in the history of royalty.

I think that more than a little of this is due to things like this (from Some It's Just As Well, via Chris Lynch): 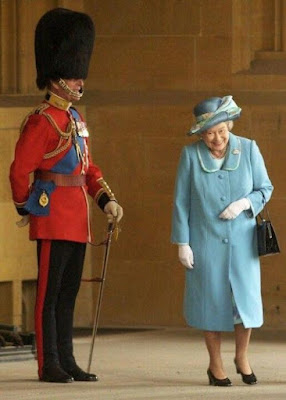 Prince Philip once pranked her by dressing as a palace guard.  The expressions on both their faces are quite endearing.  Royalty is a difficult game to play, a tension between the remote and mysterious vs. the human face.  Queen Elizabeth managed that better than any monarch that I can think of.

It must be bittersweet for her to have this celebration without her beloved Philip.  Any while the moniker "Widow of Windsor" was taken by a Queen Victoria grieving for her lost Prince Albert, it's not hard to imagine that it applies in spades to Good Queen Bess as well.  And yes, that one was taken as well but you know what I mean.

And so Congratulations to Her Majesty (protocol be damned).  We here in the Colonies decided on our relationship with monarchy these two hundred years ago, but if you were to have a Sovereign you could do much, much worse than Elizabeth Regina.  And you would be most unlikely to do better.

Labels: are you pondering what i'm pondering, europe

She was schooled well.
The English also liked the Queen Mother very much.

Yep, as we say, she done good! And it STILL doing good!

Crap, I thought you were talking about a Jubilee down on Mobile Bay, I don't much care about those people.

Growing up during The Blitz probably had a lot to do with her character.

But while she's no doubt left her monarchy stronger, no one is panting and drooling for King Chuck the Schmuck, but rather hoping he rules for a year and a day and quietly abdicates, if he can't manage a fatal coronary instead of a coronation.

ERII's entire extended family has been a sad decades-long train wreck, a never-ending cornucopia of gifts to tabloid writers and editors around the world, and I think her subjects' goodwill and long-suffering ends when she does.

Will and Kate are a bargain basement substitute, and they'll spend a lifetime just trying to get to where their grandparents and great-grandparents were in terms of the goodwill of the commonwealth, if they ever can.

Personally, we hope she hangs on in good health until Chuck shuffles off his royal mortal coil, for the good of all concerned. I kind of think she does too. No one wants the spectacle of King's Consort Camilla getting egged in parades on a regular basis.

And indeed they WILL do much worse when she is gone and dear ol' Charles takes over!

Aesop despite your odd use of the royal "We" in your next to last sentence, your smart enough to know all good things come to an end.

Entropy occurs unless strong people fight tooth and nail against it.

As shown by our current Sock puppet and his handlers.

But onward to the bread and circuses of the proxy war against the Russians.

Fun until you run out of bread (oil, electricity, water and so on).

England is mostly a side show for the troubles coming to America.

England has been mostly a sideshow since 1946, and Russia since 1990. Our turn is coming.

I'm a history buff whose number one hero is George Washington. And I love a bunch of his cronies just a little less. But I love Elizabeth. I think because she has CLASS in a way our own royalty (and we DO have royalty - it's just not from pedigree) doesn't begin to meet. And I really really loved Philip. He was SO not woke.