The election is over

Donald Trump just closed the deal with the American electorate.

Turn out the lights, the party's over

The only thing that the Democrats had going for them was the lockdown.  The breathless hyping of the 'rona was intended to fan the flames of fear which would justify further lockdown and economic devastation.  They then blamed Trump for all this, while the media shamelessly covered for them.  That's all gone now.

They say that, 'All good things must end'

But stop and think about what they're selling.  Fear.  Who wants to buy that?  Who would  choose to live their lives in fear?  People will only do that if there isn't a better alternative.  Donald Trump just gave the American Public a better alternative.  It's this: Sure, you might catch the virus.  It's not that bad.  I know, because I caught it.  Now it's time to get on with things.

Miguel compares it to FDR's first inauguration address: "The only thing we have to fear is fear itself."  Miguel points out that Trump is not an orator like FDR was which is true, but actions speak louder than words sometimes, and Trump checking out of the hospital speaks really, really loudly.
What's even funnier is that the media simply can not not cover this.  It will be front page news for the whole week.  They won't be able to stop themselves, because this is something that people will want to hear about, because they really don't want to live in fear forever.  It will drive ratings, which drive profits.
The end of this week is 24 days from the election.
There's been a cynical joke that the 'rona lockdowns will end on November 4.  The handwriting is on the wall now for the lockdowns - people will start to look for justifications, because there is finally an alternative to the fear.  The justifications are (as I have been posting for months and months) really thin tissues of exaggerations.
And Trump is ready to play his the next card: call out the overreaction by government officials.  Name incidents, describe how innocent citizens were arrested.  Name the officials responsible.  Remember the guy out paddle boarding all by himself?  Remember how he got arrested?  Do you think that Trump can't shine the light of attention on that?  Do you think he doesn't have dozens of other examples, like playgrounds being closed?  Do you think that the electorate won't pay attention to him when he talks about that? 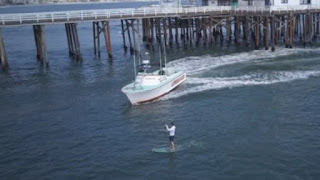 The Press will want to defend the Democrats against this attack but there's really nothing they can do.  I mean, when you see a video of a Mom arrested because she let her kids play outside, who are you going to believe: CNN or your lying eyes?  That's next week gone, too.  Then there are only 17 days until the election.  Does anyone think that Joe Biden will be able to turn things around in two weeks, especially when he's selling fear and Trump is selling hope?
He doesn't even need to talk about the lives and businesses destroyed by the lockdowns.  That's there, and everyone knows all about it.  Trump is going to paint the Democratic Party as the party of tyranny and fear and the Republican Party as the party of freedom and normalcy.  As the song goes, he'll use the 8x10 color glossies with circles and arrows to make his case.  Heck, he'll point out that the (Democratic) Governor is Michigan is ignoring her State's Supreme Court ruling to keep her thump on the public.  There's your tyranny, writ large.  And a whole bunch more, too.
I've said for a while now that Trump will easily cruise to a win next month.  Now it's looking like the down race Democrats are going to get slaughtered, because they'll be selling fear and tyranny against hope.  Good luck with that.
Remember last election with all the Republicans celebrating and the Democrats crying?  Second verse, same as the first.

What a crazy, crazy party
Never seen so many people
Laughin', dancin'
Look at you, you're havin' fun

But look at me I'm almost cryin'
That don't keep her love from dyin'
Misery, 'cause for me the party's over

Trump showed the American People what we who lived through the 'it's a flu but not the flu' and survived 'flu but not flu' starting back in late November or December.

Treat it correctly, isolate, treat for secondary infections and even the sickly survive it.

Seriously, you have to work to get slabbed by the Corona. Or have people working to slab you, like putting you in a nursing home where the care isn't standard.

My wife had the 'Rona. Wooooo. She survived, just took a while to whack it. Thanks to having a nebulizer and albuterol at home, her lungs stayed fluid free-ish. And a rather nasty round of antibiotics took care of any secondary infection, along with any gut bacteria.

One of the statistics that the world considers is what's called excess deaths - deaths over the normal annual rate. For example, you can see that a place might have a bad flu year and have several thousand deaths in excess of the annual rate or a year with an easy flu year and deaths are less than the annual rate, negative excess rates.

When a more normal flu outbreak hits that place, the people who didn't die in the easy year before tend to die in that following year. You haven't had any virus tests to demonstrate those excess deaths are due to the bad flu, but it's a reasonable conclusion. It's sort of like Grim J. Reaper saying, "pay me now or pay me later."

I did some third grade arithmetic this morning to derive the number excess deaths from Covid this year. I took the 210,000 Covid deaths from the Johns Hopkins site and guesstimate how many days they've been happening. We're at day 280 of the year, but the deaths didn't start until day 30 or 35, so call it day 250. That gives 840/day average. The CDC data that says 7800 people die per day, I get an excess death rate of about 11%.

Of those, the majority (in any source you look at) tend to be over 80 with multiple conditions. I can't give it a number, but chances are some of these are the normal year to year variation.

I know "normal people" don't like to talk this way about deaths as pure numbers. Every death is a tragedy to the family. I'm just saying we've had an incredible overreaction.

"I've said for a while now that Trump will easily cruise to a win next month. Now it's looking like the down race Democrats are going to get slaughtered…"

From your mouth to God's ears.

But, as the blogfather been saying for months, "DON’T GET COCKY."

"I've said for a while now that Trump will easily cruise to a win next month."

One thing that does not get enough press is how the Communist Party USA has endorsed the Democratic candidate the last handful or so of election cycles. Somehow that can't seem to make the evening national news.

I'll take the minority report position. I think the media has done it's job and the stage is set. The election will be decided in the big Blue states. Trump loses and Congress goes Blue as well. Pr. Biden is medically retired sometime during the first year. Right after that, we'll really see the plans for reshaping America.

We're 27 T$ in debt. We're not getting out of this. We are so far past the horizon on spending that no one ever mentions it. The press ignores it. Both parties act like it's meaningless. That bill will come due.

If you're right I'll be pleasantly surprised, but if we don't deal with the debt, it won't matter who holds office for long.

I am worried that ASM826 might be right. Not so much about the debt, but about the media. Minitru is going to do everything it can to shoot down Trump. It will only get more intense over the next 30 days. I hope for a Trump victory - our country as we know it depends on it - but Trump has an uphill battle. I think this election will be very close, disputed by the losing party, and not actually settled for 3 or 4 days after the election. Those who talk about a Trump blowout, or him winning 40 states, are not looking at reality, I am afraid.

I had a brief chat with a guy last month who has a small welding shop. I mentioned that things might get sporty in November, and he proceeded to bitch about Trump. Claims to be a Republican, and is obviously a NeverTrumper. EVERYTHING out of his mouth was talking points from the Democrat Media. Very obvious that he gets all his news from TV in some fashion. I was a bit shocked to hear all that bull spilling from his mouth.

How to get thru to him? He doesn't seem to have a web presence. No business listing that I can find, which is odd, as he has a product that he manufactures.

With enough people like him, Trump won't get elected.

1. I think Biden will be "regretfully" Arkancided.

2. Yes, the bill will come due financially; just sooner if the Dems win.

(Shameless self-promotion of a piece I did on that.)


In general, I see people repeating the Charlottesville lie, the 200,000 without a hint of skepticism, etc., etc., etc. It's like these people have been pithed.

And I agree - how to get through to these people? They say "Well, elect Biden, and if we don't like him we'll go back to "R" next time. Really? REALLY?

The dead people didn't get the news. And they will vote 100% Democrat.

You nailed it. This Kung Flu has been overblown since day one. President Trump is in the age group that has the highest mortality rate from it. He also had an aggressive treatment, something that most doctors will not prescribe.

My SIL who is a pharmacist came down with the Kung Flu. She is in her late 50's and spent 3 days in the hospital and another week at home making little progress. She self prescribed hydroxychloroquine for herself and was symptom free three days later.