The kingdom of heaven is like to a grain of mustard seed, which a man took, and sowed in his field.  Which indeed is the least of all seeds: but when it is grown, it is the greatest among herbs, and becometh a tree, so that the birds of the air come and lodge in the branches thereof.

This is a little unusual for the regular Saturday country music, because it's not country music.  But stick with me - folks who like country music will like today's story which starts with "Happy 100th birthday, Col. Gail Halvorsen". 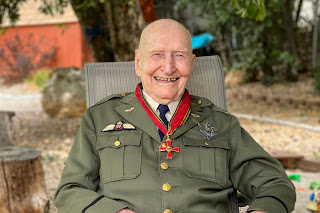 He was a kid who liked to fly, joining the Civil Air Patrol in 1942 and then the brand new US Air Force when he was old enough to sign up.  He missed World War II because of his age but found himself in the left hand seat of a C-54 in Germany, 1948.  That's when Stalin cut Berlin off from the Free World and the Berlin Airlift started.

Lt. Halvorsen was at Tempelhof Airport one day when he saw some kids standing on the other side of a chain link fence.  They told him not to worry if the weather was bad and he couldn't bring in food.  You see, they said, they could live on very little food but if they lost their freedom they thought they would never get it back.  Smart kids.

Halvorsen wanted to do something for them and told them that he'd drop some gum from his plane.  They'd know it was him because he'd wiggle his wings.  He and his co-pilot pooled their candy rations for the next day's flight.  Because it was heavy, they made little parachutes out of handkerchiefs.  Over the next weeks the number of kids waiting for his flights grew and grew.  He tells the story about when his Commanding Officer found out about it:

On his return from Berlin, he was told that Col. James R. Haun, the commanding officer of Rhein-Main Airbase, wanted to see him in his office.

Here, Halvorsen, sitting in his Provo backyard and wearing the same uniform he wore back then, picks up the narrative.

“‘Halvorsen,’ the colonel asked when I came in his office, ‘What in the world have you been doing?’

“‘I’m not stupid. What else have you been doing?’”

“That’s when I knew they knew. I got chewed out real good,” he says before flashing his trademark smile. “But at the end, the colonel said, ‘That’s a good idea. Keep doing it. But keep me informed.’”

The Berlin Candy Bomber had the clearance he needed to carry on.

They called him the "Candy Bomber" and when the word got to the Press it became a sensation back in the States.  School children and candy manufacturers donated candy for the children of Berlin.  In just a few months Lt. Halvorsen couldn't keep up with all the candy and handkerchief parachutes that were arriving in the mail.  Pretty much everyone in his unit was now a Rosienbomber (as the German kids called them - "Raisin Bomber".  Halvorsen himself was known as "Uncle Wiggly Wings" because of his signal that he was about to drop sweets.

Operation "Little Vittles" dropped 23 tons of candy in a quarter million handkerchief parachute loads.  Halvorsen was awarded the Großes Bundesverdienstkreuz, Germany's highest award.  He also got some marriage proposals via mail from adoring fans back home, but he went home and married his College Sweetheart.  They had 5 children and 24 grandchildren.

In a very real sense, he represents what is best with America.  Three years before we had been mortal enemies of Germany, now we were trying to take care of their kids because, well, kids.  I'm not the only one who thinks this - he retired to his native Utah and in 2002 for the Winter Olympics there the German team asked him to carry their national standard into the stadium in Salt Lake City.  Bravo Zulu, Colonel.

Like I said, Col. Halvorsen, happy 100th birthday.  You make me proud to be an American.  This song is for you because you've earned it 100 times over.  Sammy Davis.Jr. didn't like it initially because it was too sweet.  It became his signature song, and I think he's approve of it being played for your 100th birthday.  Here's Sammy singing this song in Germany, back in the 1980s.

Like I said, it's not country music.  But I think the community can take a day to salute a veteran who represents the best of this country.  Here's what looks to be an early 2000's documentary of Operation Little Vittles.  It's long but well worth a view.  If you aren't looking for a kleenex between 15:00 and 18:00 then I'm sorry, we just can't be friends.  And the last line in the video hits the nail on the head, spoken by a now grown German kid who remembers catching the parachutes and knows that it meant that someone who didn't have to care, cared anyway: The world needs more Halvorsens.  Amen, and amen
Like I said, Col. Halvorsen represents the best this country has to give to the world.  He is a man who made the world a better place.  Happy birthday, Uncle Wiggly Wings.
Posted by Borepatch

taminator013, I don't know. There's an extensive Wikipedia page for him but it doesn't go into WWII

As soon as I saw the name I knew who you were talking about, I had blogged about him. Berlin was next to Stuttgart near and dear my heart, was attached to FSB for a bit in 1987. That was a heck of a story and I didn't know about the 2002 Olympics, Dang, what an honor. Yes he represented the best of America, we GI's have a soft spot for kids, we are total assholes toward our enemies, but not to noncombatants. Heck of a good story, thanks for posting it.

i read about the Berlin Airlift when I was in Jr. High School. Amazing feat of, well, everything. And the book even touched upon Lt. Halvorson and OLV.

Sad that so many today know nothing of what happened back then. Very sad.

It's amazing that he is still alive. What a national treasure.

As to candy and Germans, growing up a neighborhood family had a German for a wife. He remembered fondly of, even in the mid '50s, American convoys and patrols handing out food to the locals, and the older kids she grew up with remembered many families being 'adopted' by Americans once fighting was over in the area for purposes of making sure the kids were fed.

We Americans are weird that way.

Wikipedia has Halvorsen joining the USAAF in 1942 after training in the Civilian Pilot program. He flew transports in the South Atlantic (probably part of the Trans-South Atlantic Air Link between Brazil and Africa).

What a great and uplifting post! I had no idea...

I'm constantly reminded of just how much I don't know about history.

I only came across the story of "Uncle Wiggly Wings" within the last couple of months and read a few stories about him. I still hadn't heard the part about him carrying the German flag into the '02 Olympics.

Every American kid should know this story. Maybe it would keep the college kids from shoving their heads so far up their posteriors.