We may (or may not) be on the brink of civil war.  There are no external enemies who can take down this Republic, but history is clear that civil war is the fastest way to political, social, and civilizational collapse.  It almost always starts because the center becomes too strong, and so the rewards to seizing control in a winner-take-all situation become too enticing.

We saw this in ancient times, where the eastern and western halves of the Roman Empire fought each other at the Battle of the Frigidus River.  The eastern army under Theodosius the Great won, temporarily reuniting the empire.  However, Theodosius died four months later, leaving the empire to his young sons.  Both were hamstrung because so many soldiers had killed each other that the western empire never recovered, and the eastern portion just held on by a thread.

The rewards were too great for Theodosius to ignore, too great to even allow him to leave his empire in good shape when he shuffled off the mortal coil.  In the west, civilization fell apart so completely that it took a thousand years for it to recover.  Louis XV's well-quoted epigram from 1400 years later applies in spades: Après nous le déluge.  After us, collapse.

I don't know whether we are looking on that today, but it's possible in a way that seemed beyond belief five or ten years ago.  The stakes of our winner-take-all imperial government have been exposed as too enticing to ignore for the Left.  The stakes are too high for the rest of the country increasingly feeling hemmed in by the Left: you can't speak your mind, you can't worship as you please, you're forced to "social distance" in a way that the Left's pet street terrorists don't.

Maybe there's still a chance to turn this around.  If not, then it doesn't seem like there are alternatives to political, social, and civilizational collapse.  When Civilization collapses, it falls hard.  I posted before about the Fayum Mummy Portraits from the Roman Empire and how portrait painting was a thriving (and stunningly competent) part of their civilization.  Then that civilization fell and it took a millennium to recover. 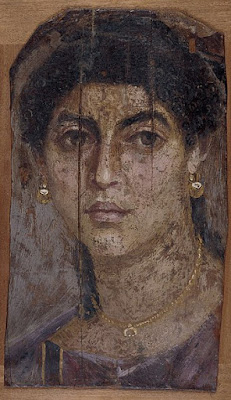 I wrote back then:

My opinion is that this was the greatest portrait (that we know of) for 1500 years, faded by 1900 years.  It dates from around the reign of Emperor Claudius, or possibly Nero.

Then it was all gone, along with all the rest of that civilization.  Here is a very good video about these portraits and just how sophisticated the society that created them was.

In Egypt's sandy silence, all alone,
Stands a gigantic Leg, which far off throws
The only shadow that the Desert knows:—
"I am great OZYMANDIAS," saith the stone,
"The King of Kings; this mighty City shows
"The wonders of my hand."— The City's gone,—
Nought but the Leg remaining to disclose
The site of this forgotten Babylon.

We wonder,—and some Hunter may express
Wonder like ours, when thro' the wilderness
Where London stood, holding the Wolf in chace,
He meets some fragment huge, and stops to guess
What powerful but unrecorded race
Once dwelt in that annihilated place.
- Horace Smith, "Ozymandias"

Labels: America, Civil War 2.0, Cold Civil War, Government power grab, Rome, The decline of the Progressive West, us vs. them

I read somewhere this am about the civil war having started already, like it started in 1820 but didn't come to blows til later.
But although I believe something's going to blow, we don't have the geopolitical division, only the cultural/political division.
And without competing political capitals, what to rally around?
Or perhaps where.
Now an armed insurrection...which may qualify as the Civil War, but who will rally the troops? and where?
I don't know.
I want to be cautious. A few weeks ago I opined on my radio show as to the best way to take the capitol in Lansing.
How did I know those guys took me seriously?

I still say the country has been a lost cause ever since Clinton was elected the second time. You can't fight that degree of ignorance.

The parallels are eerie if obvious.

Greater and greater concentration of wealth in fewer and fewer hands, who just happen to be tax exempt. Massive debt. Barbarian incursion. Dilution of of cultural ethos, and on.

As you write, we lack rival, armed power centers -- ie two sides capable of offensive/defensive operations. What we do have is the potential for collapse as the center ceases to hold.

Long story extremely short -- what happens when USGOV can't pay the Army? Then the rubber hits the road as, in a round about way, late antiquity.

More to the point, is the civil wars that brought on the fall of the Roman REPUBLIC, finally ending in the Roman Empire under Augustus. This played out over about 100 years from the Graccis, through Marius and Sulla, Pompey and Caesar, Octavian and Anthony vs the plotters and finally the war between Octavian and Anthony.

Where we are in this time line is impossible to say, but war is coming eventually. The country simply cannot be put back together again. Whether the spark happens this fall is anybody's guess but it will happen someday. (Unless the surrender monkeys in the Republican Party get their way.)
And when it does we lose the Republic even if we win the war because of the things we will have to do to win.

Better to do the National Divorce and preserve the Republic in a large part of North America.

Yep parallels are definitely there...