One of the nice things about being in Florida is that The Queen Of The World and I can run out for a beach weekend.  We're at Sanibel Island which is pretty darn nice.  This is the view from the hotel balcony. 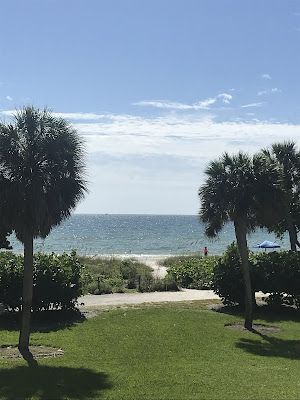 It's a nice escape and here in Florida it's not just a day dream.  An hour or two and you're in paradise.  Back up north, it would just be a dream.  Yeah, there's a country music song for that.

Driving down the interstate
Running 30 minutes late
Singing 'Margaritaville' and minding my own
Some foreign car driving dude
With a road rage attitude
Pulled up beside me talking on his cell phone.

He started yelling at me
Like I did something wrong
He flipped me the bird
And then he was gone.

Some beach somewhere
There's a big umbrella
Casting shade over an empty chair
Palm trees are growing, warm breeze is blowing
I picture myself right there
On some beach, somewhere.
I circled the parking lot

Trying to find a spot
Just big enough
I could park my ol' truck
A man with a big cigar
Was getting into his car
I stopped and I waited for him to back up
But from out of nowhere a Mercedes Benz
Came cruising up, and whipped right in.

Well, I sat in that waiting room
Seemed like all afternoon
The nurse finally said the doc's ready for you
You're not gonna feel a thing
We'll give you some novacaine
That tooth will be fine in a minute or two
But he stuck that needle down deep in my gum
And he started drilling before I was numb.

On some beach, somewhere...

A weird thing about Florida, though - I've been flipped off a couple times already in only a few months.  That never happened up north.
Posted by Borepatch

So, Mustangs are now "foreign"?
Imagine my surprise.

Is that hotel pet friendly?

We suggest The Green Flash for lunch to watch the dolphins play. LOVE Sanibel Island!

Beav, Green Flash was a disappointment, They were actually pretty rude. I wouldn't recommend them, but that was us.

BadFrog, Over Easy was REALLY good.