Florida Man shows up at beach restaurant - with the Stanley Cup: 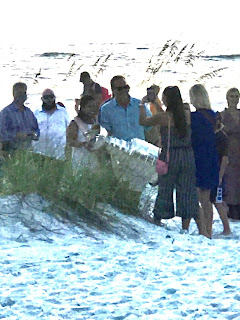 Photo taken by The Queen Of The World at the Sandbar Restaurant on Anna Maria Island, last night.  It seems that the GM of the Tampa Bay Lightening likes the restaurant.  He was extremely gracious to the crowd of thrilled diners and everyone (including your humble host) got to have their photo taken next to it.  It was quite something to touch it.

I remarked to one of the security guys who were watching everything that he didn't have to worry.  If anyone tried to steal the cup the crowd would beat them within an inch of their life.

Labels: Florida, made of win, Queen of the World

You were at the Sandbar last night? My neck of the woods.